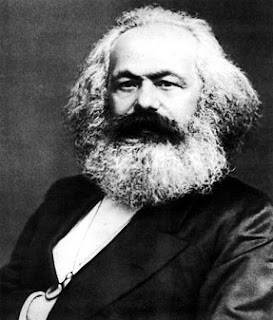 A revival for Karl Marx: since the financial crisis there have been sold 3x as much of his book 'The Capital' (Das Kapital), in former Eastern Germany. Here you see his natal chart and transits. Jupiter is the planet of successes. Today transit Jupiter is trine his Sun.

Of course, Karl Marx does not live anymore. But I noticed that when a person's name, reputation or life's work is being mentioned, there are important and significant transits with the natal chart.

RELATED:
About the chart of Karl Marx and the Jupiter of his guardian angel Friedrich Engels
About father Pio and the progressed chart after death

Another example of an effect after death: in May 2005 I wrote about the Liberty (it is still in my Dutch files). I had seen a documentary about how Israelian planes fired an American ship in the days of Lyndon B. Johnson (27th August 1908,Stonewall at 4:52 a.m.). It was suggested that it was a case of faul play by the American president. In May 2005 transit Neptune (the planet of gossip, negative approach, the media + scandal) was conjunct his descendant.