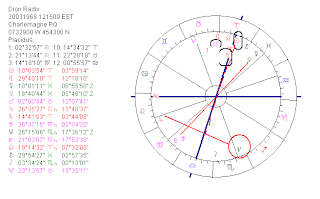 A bit too slim Celine Dion ended a series of performances in Las Vegas. Celine, according to her birth chart, is a person who tends to work too hard.

With an ambitious crucial Saturn on the MC and a 'calling' (not aspected in sign...) Mars - for the workaholic - her natal chart tells us about energy, drive and the limits. But in the first place Celine is an artist. Neptune is oriental in her chart (rising before the Sun) and that indicates an orientation on the immaterial field (such as for example idealism, romance, arts, religion...). Also notice the midpoint yod of Sun, Jupiter and Neptune. It is a combination for people who are succesful in the media.