IKE (of Tina) TURNER:
and how her birth chart matches his... 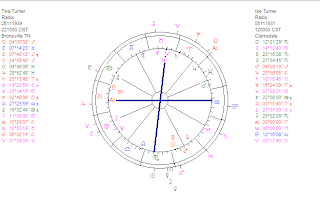 Ike Turner (5 November 1931 Clarksdale) died yesterday. He is famous as the 'man of'...Tina Turner was his wife until she left him after abuse.
'
You see her birth (26th November 1939, 22h10 Bronsville) and the positions of his day of birth outside the circle. His Mars is square her Mars and Sun. I have seen several examples (like that of Paul and Helen McCartney) of people fighting each other who have a conflict between their planets Mars.

In her natal chart Tina has Sun square Mars. That is by the way one of the major indications for divorce in the chart of a female.
Notice that Tina has Venus square Neptune, that Venus disposes of the Midheaven and Neptune is square midheaven. That connects artistic talents with the MC (vocation, profession).

Another thing I notice is that Ike's Sun and Jupiter are conjunct crucial positions of Tina. They were very influencial in each others' lifes...He may have been supporting and coaching her (besides the beating...).

Ike Turner died in the year that his progressed sun passed to another sign. That is an indication for a change in 'being'.