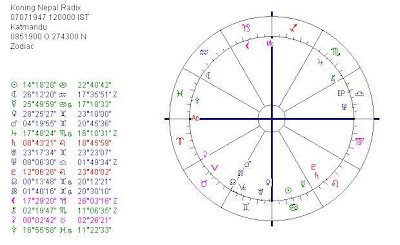 King Gyanendra of Nepal (7th July 1947)has definitely become the last king of Nepal, now that the people voted in favor of a republic. This happens to him with Nodes square Nodes (a conflict in a community) and Pluto opposed to Venus (forced upon choices) and with the progressed Sun conjunct his prominent Venus (Venus is rising before the Sun and in hard aspect with Zero Aries). This is the second time that a progression of Sun and Venus is marking an important moment in his life. Before it was with the progressed Sun conjunct progressed Venus that his power was taken away and his role became that of a ceremonial ruler (april 2006). Perhaps Venus is crucial in his chart where it comes to his position in society.

BTW On the 4th of June 2001 (with transit Pluto inconjunct the Suns and transit Neptune opposition Saturn) he tried to get all of the power in the country after the massacre crown prince Dipendra committed, killing 10 persons. Dipendra was born 27th June 1971 with Mars sesquisquare Sun and biquintile Pluto, while Mars is 157.5 degrees away from the midpoint Saturn/Pluto (a combination that is often seen in the charts of people involved with violent death, as a witness,victim, investigator or the killer, of course not without at least 2 other indications).