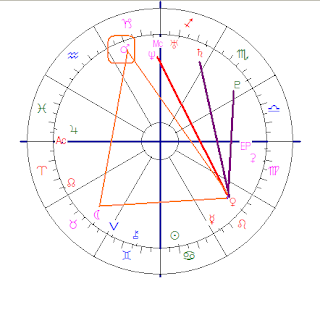 Lindsay Lohan is in the news often, but rarely in a positive way. This time her ex tells the world that Lindsay is a nymfomaniac. OK...She is born 2nd July 1986, only 21 and famous. I wonder why her debute album was called 'Speak', looking at the lack of positions in air signs, the signs of communication. Missing elements and aspects often turn out to be conspicuous in abscence.

Looking at the gossip about her sexlife...look at the complex lines in her natal chart between and with the planets and lights that symbolise love and sex (Mars, Venus and Moon). Quindeciles point at obsession. In her chart Venus has two quindeciles: one of 75 degrees with Pluto and one of 105 degrees with Saturn: a combination for a die hard in love affairs: it might cost her to be beautiful and looking good always. Neptune adds addiction and desillusion...And what about the meaning Neptune has, too? Gossip...it is sooo Neptune!
Geplaatst door Astromarkt op 12:38 AM