MISSING PEOPLE
Re: the release of Joran van der Sloot 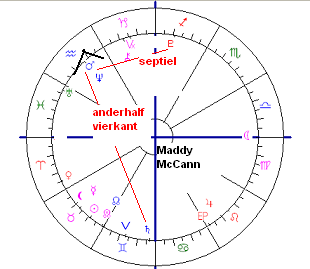 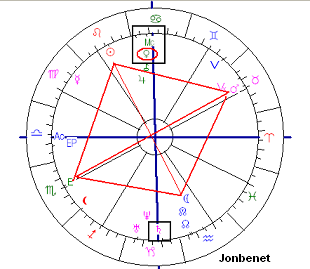 This is a- a bit shortened - translation of the article in Dutch called 'Vermist', about missing persons and those involved. Astrology is no help at all in finding 'who done it'. But I like to show how negative press related to aspects with Neptune have a sometimes false effect. Charts and stars do not judge, they just correspond.
This is about the baby kidnapped by the dingo (and about the mother who was found guilty instead). It is about Jonbenet Ramsey, found hours after dying in her own house. This is also about the still missing Natalee Holloway and Maddy McCann. In all of those cases aspects between Mars and Uranus and between Mars and Pluto play a vital role. Also Neptune, planet of mysteries, alcohol, drugs, animals, media and missing people is always there...

1. DINGO
The baby of Lindy Chamberlain (born March 4, 1948) is supposed to have been killed by a dingo and taken away on August 17, 1980. But nobody at the time believed what the mother told them (dingo's were supposed to be nice doggies). The press was against her. In her birth chart the Sun is inconjunct Neptune.

- Negative image -
Lindy had the bad luck to have Sun inconjunct Neptune and Pluto (forming a Yod). How easy is it with such a combination to be seen in the wrong light! Her religion (she is a Seventh-day Adventist) was not much of a help in Australia. And notice that Neptune is the symbol of the wild animal, too. After years in prison they found a piece of the torn clothes of the baby, far far away and she was free again.

There is another clue to the fact that she was found guilty of murder. Her Saturn is right between Mars and Pluto. That is a combination for the theme of violent death that she shares with serial killer Berkowitz, Idi Amin and the murderer of the Dutch politician Pim Fortuyn (named Volkert van der Graaf). But she also shares this combination with those who were victimised by such a crime, like Yoko Ono, the girl Mahaty (killed by Karen Homolka) and John F. Kennedy.

- Faithfull coincidence -l
The event seems to have been a case of bad luck and coincidence. Mars of the little baby born June 11th 1980 opposed to Lindy's Sun and her Uranus squares Mars of Lindy. On the day the dingo kidnapped the baby Lindy Chamberlain had a.o. transit Mars trine Uranus and transit Uransu square to Mars. The Mars-Uranus conflict that is connecting mother and child is activated on that day.

2. THE LITTLE BEAUTY QUEEN
Jonbenet Ramsey (6th August 1990 Atlanta 11:56) is the little beauty queen aged 6 who was murdered on December 26 1996. The family always said someone from outside the house and family must have done it. And though on the internet there is a lot of gossip going on about times and statements that do not correspond (like in the case of Madeleine McCann, again)...there are no proofs against the family.

a. Father John Ramsey (7 december 1943, 12h45 Omaha) has Sun opposition Mars and Mars conjunct his crucial Uranus on the IC. Those are indications of someone with a hot temper. In October of 1996 he had Sun opposition Pluto and in January of the following year 1997 his Sun reached a sesqui square with Saturn. Neptune - the planet of the media - was on his progressed MC and so he was part of a gossip going around. Note that this is the same sort of aspect his little daughter had at the time! (see below...) Saturn was also in conflict with his progressed Ascendant and Venus. All these are very tough aspects that seem to match with the horrifying situation.

- Jonbenet -
Jonbenet has an intruiging birth chart. This natal chart points at the disadvantages of beauty and charm and...at danger.

- 26 december 1996 -
On the final day of her life Jonbenet had an appropiate transit of Neptune inconjunct the MC. She was missing for a few hours and her death has remained a mystery. She is sharing the Neptune-MC aspect with her father, that day.

In her solar return chart for 1996 Mars and Saturn take position on the cross of the chart: an end of energy.

- Fake killer -
One day a so called killer shows up: John Mark Karr (11th December 1964m Hamilton), a man with Mars partile conjunct Pluto. He and the victim share the aspect of Mars and Pluto. His Uranus is inconjunct her Moon (zero orb). His Venus trines hers. His Mars trines hers. He could have done it and so he was arrested. John Mark Karr has the same connection between Sun, Mars and Uranus as John Ramsey. But...his DNA does not match and though the man is a pedophile, he did not seem to be the murderer and was released on October 5, 2006. Karr was just obsessed by Jonbenet...

Another case of missing persons is that of Natalee Holloway. She vanished after a wild night in the Caribeans. Suspect is Joran van der Sloot, but there is no body to proof that Natalee is death, even. I mentioned in the article about sharing aspects this:

"He is born August 6, 1987, Arnhem. She is born 21-10-1986 Birmingham USA. He was the last person who saw her alive, it seems. As he suspected his and her faith are connected and so are their charts. Apart from the fact that his Mars squares her Pluto and Venus (...) they share :
- Sun conjunct Mars (he) and Sun square Mars (she)
- Sun square Pluto (he) and Sun conjunct Pluto (she)
- Both have Mercury conjunct Venus
- He has Jupiter sesqui square Saturn, she has the square"

When she disappeared Natalee had transit Mars semi square Mars and sesquisquare Pluto, activating the dangerous Mars-Pluto connection in her natal chart. Joran had Pluto conjunct Uranus that day and sesquisquare Venus. He also had Mars sesqui square Pluto. So coincidentally they had the same sort of transit on the same day, added with the aspects they already shared. Joran van der Sloot remains a suspect and was recently arrested for the second time, without any results. On December 8, 2007 they released him for the second time.

4. MADELEINE MCCANN
Maddy McCann vanished on May 3, 2007 at about 9 in the evening from the appartment her parents had rented for the holidays in Portugal. The parents were in a restaurant with friends. It is said that she was walking outside in pijama's the night before and this might have drawn the attention of some person. And it could be that her parents (doctors) gave her something to sleep. But nobody knows for sure what happened...

When she vanished the transitting Sun was in aspect with the positions Mars, Saturn, Neptune and Pluto had on her birth day. It was an evil day. And Neptune squared her natal Sun. Neptune, the planet of mysteries, drugs, mist, sea and disappearance. And indeed, this is stilll a mystery. It is also a media hype (Neptune again!) and notice, how religion (the visit to the pope) was again part of the scene.

But does this point at involvement or is it more? The Jonbenet-Karr-case shows that coincidence does exist...

Cases and charts like these are very much showing that speculations about guilt should not be done based on astrology. I have notice how the charts of lawyers and sollicitors seem to have the same sort of aspects as the criminals have...and their victims...The aspects point at a theme in life, not a guilt. The stars do not judge.

* Not:
In AstroMagazine, on 29/08/2007 I wrote about Steven Truscott. He had been found guilty when he was 14 and they accused him of raping and killing a schoolmate. He got life, was released after 10 years in prison (the best years of his life) and in 2007 (48 years later) found innocent. He was born January 18, 1945 in Vancouver. He has a close Yod of Mars with Uranus and Pluto. There were three midpoint combinations between these planets. Saturn opposed to Mars and Neptune was making a square. Astrological language for a possible arrest and crime as a theme in life.

John Mark Karr also has a combination of Mars-Uranus-Pluto! Robert Murat has Mars opposition Uranus. John Ramsey has Mars conjunct Uranus. And the only certainty that we have is that their names are linked to cases of missing people. It does not mean they did it. A television man in Holland (Jaap Jongbloed) is presenting a program about missing people . He has Mars semi square Uranus and Neptune (ruling the MidHeaven) is sesquisquare the MC. Check it yourself (he is born April 24, 1955 aat 9h30 in The Hague). This seems to be a perfect chart to end this article with...

You see above the charts of Jonbenet Ramsey and Madeleine McCann