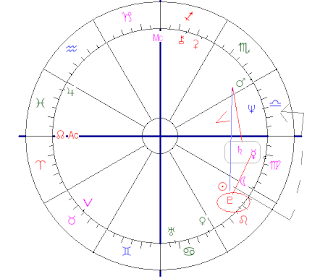 John Darwin, the man who reappeared after being a missing canoer since March 2002, made all the efforts to be able to pay for his debts. He was born 14th August 1950 (according to Wikipedia) and though time nor place is available the birth chart shows some very interesting clues to the commited crime.

Pluto is rising before the Sun and conjunct the Sun. Money, power and sexuality, cases of life and death...these are the main items in his life because of that prominent Pluto. Notice that Mercury is conjunct Saturn and semi sextile Pluto: the key to a strategic mind. Mars semi square Saturn is often there in the charts of those who commit a crime or fight it. Darwin used to be a prison officer. Notice how the 75 degree quindecile aspect connects Mars and Pluto with Mercury-Saturn, connecting death with strategy.

It is interesting to see that the progressed Sun is now conjunct Neptune. Often Neptune is present where scandalls are being revealed and people see their portraits in the newspapers. This progression could also be read as 'enlightening a dissapearance' in this case.