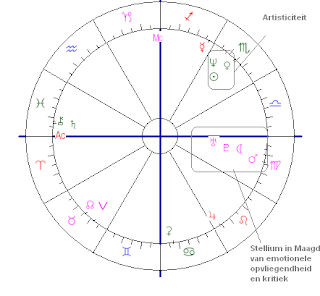 Bullying tv-cook Gordon Ramsay (a Scorpio with a service minded Moon in Virgo, born 8th november 1966) has been visited by inspectors and they concluded that his business place needs a bit more cleaning. That does not really influence him. Transit Jupiter is conjunct the progressed Sun. Transit Uranus trines his natal Sun. All that matters is that Uranus is afflicting Mars right now, so that his work (Mars) is in the newspapers (Uranus). As mr. Ramsay has an oriental Uranus conjunct Mars, by translation of light, in a stellium with the Virgo Moon he is known for his hot temper and heavy critics. This goes together with emotions and ...yes...passion! Notice alsow the connection between the 3 planets in Scorpio (Venus, Sun, Neptune, a creative combination).

PS November 22
The above mentioned passion and a hot temper might also be the key to the latest news about him having an affair. Note that both Mars-Uranus and Venus-Neptune are combinations that are two of the most frequent combinations in the charts of men who divorce (once or more) or never get married at all. (The other two are Moon-Saturn and Moon-Neptune).
Geplaatst door Astromarkt op 12:47 AM