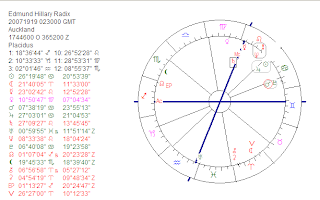 Edmund Hillary has died. He was the first man on the top of Mount Everest (on May 29, 1953) and climbed that mountain together with sherpa Tenzing Norgay. Hillary was born 20th July 1919 in Auckland, New Zeeland at 2:30 p.m. In his chart Mars rises ahead of the Sun (Mars is oriental) and Saturn is on the MC (for climbing, literally).

THE MOMENT AT THE TOP OF THE WORLD...
On May 29 1953 Hillary had transit Jupiter sextile progressed Jupiter, transit Mars on the descdendant and transits from Neptune and Saturn in opposition with his natal Moon in Aries (expressing the need to be active). The same combination of Saturn and Neptune with the Moon is also there on the day that he became a knigt (on July 16, 1953). These aspects of modesty and shyness still dominate the image that the world and the press has of this man. It is not surprising, as Saturn and Neptune are prominent in his chart (see drawing).

Still there is some self confidence and ambition in this chart. Look at the Sun conjunct Jupiter! And in his solar return for 1952/53 Jupiter was square and Pluto conjunct the Midheaven (MC). That is a combination for succes (Jupiter-Pluto-MC).
There was a progressed quincunx between Mars and Uranus for a special act with some difficulties.

STRONG AND IDEALISTIC
Notice the oriental Mars conjunct Pluto (for being a strong man in the first place) and notice the calling Neptune...His filantropical efforts to help the sherpa people are well known. And the calling Saturn on the MC sure made him climb: he made it in society and he made it to the top of the world.

TRAGEDY
Edmund Hillary lost his wife and daughter on March 31, 1975 due to a plane crach in Nepal (when they came to visit him). Transit Pluto was square Mars and transit Northern Node square Saturn on that day.Notice Mars and Pluto in the seventh house!

SHERPA NORGAY
Tenzing Norgay, the sherpa, was born 15th May 1914. In his chart Pluto was calling (= no major aspects) and square Zero Aries. In the year of reaching the top of Mount Everest Norgay had the progressed Sun changing sign (for a change in life) and conjunct his prominent Pluto (for a challenge). Transit Pluto was making hard aspect with the tightest aspect in his chart (the square between Mercury and Jupiter). The combination of Mercury, Jupiter and Pluto is, again, a combination for succeeding. Tenzing's son Jamling climbed the mountain again in april 2003, together with Peter Hillary (son out of his second marriage) to celebrate that it was 50 years ago that their fathers became famous by conquering Mount Everest.
Geplaatst door Astromarkt op 5:56 PM

I am doing some research on Hillary. What is the source of the 2:30 pm birthtime? I had also read that he was born at 4:00. Thank you.