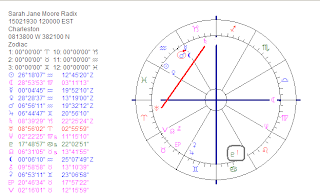 Another example of the effect of a tight aspect between Saturn and Uranus is that in the birth chart of Sarah Jane More, born 15th February 1930 in Charleston (West-Virginia), unknown time. Sarah Jane More tried to kill president Ford on September 22 1975, but she missed. Today she was released. Saturn is for limitations and Uranus for freedom and independancy. The combination is often seen in the charts of those who have to deal with the theme of breaking free.

It is not surprising that transit Saturn is inconjunct her Uranus right now. On the day of her arrest transitting Pluto afflicted the Saturn-Uranus combination. Uranus-Pluto is a combination for a revolutionary change (sometimes forced by an arrest). In the year of the crime her progressed Sun was exactly conjunct Uranus and square Saturn AND semi sextile to the prominent Mars.

Mars is oriental in her chart (for being first of all agressive or active, a do-er, willing to act) and Pluto is calling (without major aspects in sign). Pluto is symbolic for life and death, politics, sex, danger and challenges. Their positions make both planets prominent in her chart. Mars and Pluto comined refers to the use and abuse of violence. More about Mars and Pluto...