BIRTH CHART JOHN MCCAIN
and the strange interaction with Hillary Clinton in progress... 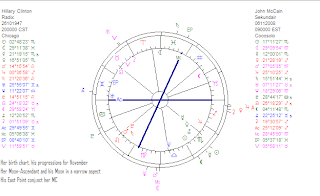 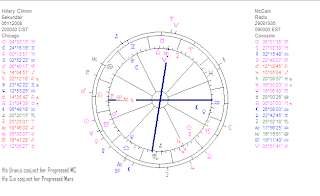 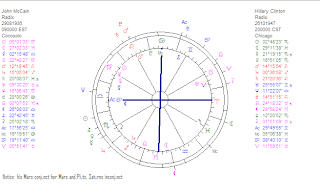 Attention: hour of birth is 11:00 hours, see reading and the source is his mother!

John McCain is named as the most possible candidate for the republicans at the moment. He leads the polls right now. He was born 29th August 1936 at about 9 a.m. (according to Astrodatabank) in Cocosolo (Panama) in a family of generals and he spent over 6 years in a Vietnamese prison after being shot down on a mission as a naval aviator. That is in line with Mars - the soldier - rising before his Sun.

Pluto is on top so that he is above all a politician. The Moon - dispositor of the 10th house and MC - in Capricorn is in a tight opposition to Pluto. This refers to being a 'die hard'. McCain not only survived Vietnam, he is also condisered a heroe for his behaviour in Vietnam. He is also a strict republican (against abortion, pro guns, for example). Moon in conflict with Pluto does not make a person flexible. Instead with this aspect changes are hard to deal with. Moon-Pluto = fanatic behaviour. The same behaviour that is considered heroic in difficult times. Saturn is exactly sesqui square the Mars/Pluto midpoint in his chart, referring to violent death as an important issue in his life. The fact is that he was in the military for years.

Mercury does not make major aspects in sign and that is what I call a 'calling' Mercury. That is an indication for having communication qualities.

Other than the presidents in my study John McCain does not have a Moon-Jupiter aspect or a Mercury-Saturn-Pluto combination. Instead he has a prominent Mercury and Pluto on top. Will that be enough to be a president, being a communicative die hard in politics? The solar return for 2008 has Saturn on his descendant and the progressed MC will sextile progressed Pluto in autumn (on the 22nd of February the Progressed MC will sextile natal Pluto). In september (from September 1 till 4 the Republican congress elects the candidate) he has the following aspects in the progressed chart:

I think the fact that Moon and his prominent Pluto (in his birth chart connected by opposition) are involved and that Jupiter is ruling the progressed ascendant give him a very good chance of becoming the republican candidate or the 'second man'. And if not, he is likely to start a new carreer.

TIGHT ASPECTS IN PROGRESSION WITH NATAL AND PROGRESSED CHARTS OF HILLARY CLINTON
it is interesting to see how the progressed charts for November 6 of John McCain and Hillary Clinton interact. Picture this:

Should it be coincidence? With these narrow aspects?? I thought it was worth mentioning it. IF they are the final candidates I will be back on the subject.

Related:
Meetings and (progressed) charts, an article that shows how the meeting and influence between two persons is related to the aspects between progressed charts.