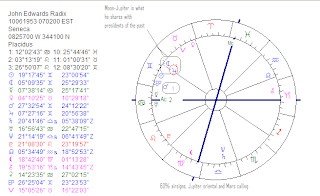 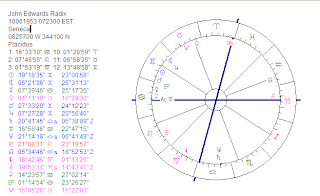 The Amsterdam University 'Vrije Universiteit', newspaper 'Dag' and 'Xs4all' developed a method to find your best candidate for the USA presidency. In a few minutes you know who to choose. I noticed it and like to share this tool with you.
Link to the electoral compass to discover your position in the political landscape for the USA presidential election of 2008.

It seems mr. Mitt Romney (Detroit, 12th March 1947) has the best chances for the caucus in Iowa tomorrow. And John Edwards (10th June 1953, 7h02 a.m., Seneca or 7h23...see Astrodatabank) said that he is the only democratic candidate who is able to beat any republican. There are many candidates running right now, and only one can be the winner. When there is only one republican and only one democratic candidate left, it will be interesting to have a look at their chances seen in the light of astrology. Let us hope it will be candidates with a known time of birth! Above you see the possible charts of John Edwards.

Apart from the difficulties with HOB'S, there is another problem: the fact that in the USA the moment of the publications of the final results is unknown. That,too, does not make it easier to do any predictions. Bias is also a problem (show me a 100% objective person;), but I am sure all over the world attempts will be made and there is a 50% chance of selecting the right president:).

For the time being you can find the following relevant readings:

and the study of former American presidents and what astrogical components they share.

Link to the electoral compass to discover your position in the political landscape for the USA presidential election of 2008,
Geplaatst door Astromarkt op 8:52 AM