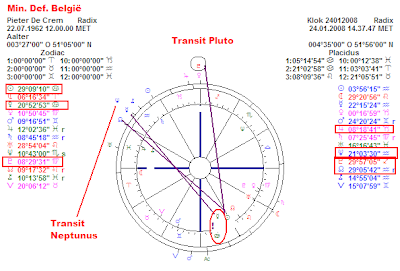 It used to be a public secret were the NATO was hiding nuclear material in Belgium, but today the Belgian minister of Defense (Pieter De Crem, born 22 July 1962 in Aalst) revealed the location so that it is now a public fact. In his natal chart Mercury is the most prominent planet (rising before the Sun and without major aspects in sign, so calling! and oriental). It means that speaking and writing is his orientation and that it could be done at any level. Today transit Neptune was inconjunct his Mercury, together with transit Mercury. It is very telling, this combinaton of mis(Neptune)-communications (Mercury)!

Relevant:
Missing elements, not aspected planets and their impact