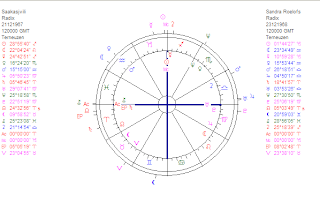 The Georgian president Michail Saakasjvili (21st December 1967) is married to a Dutch woman, Sandra Roelofs (born 23 December 1968 in Terneuzen) and they share an oriental Neptune (for idealism, for example). Also her Venus is conjunct his Mars. And the midpoint of their suns is on zero Capricorn, square zero Aries. That means Pluto has a lot of impact right now.

Transit Pluto is conjunct the natal sun of Saakasjvili today, when he is winning the elections. As his Sun squares Uranus (for wanting to change the world) this aspect refers to a revolutionary change in life. In January 2004 he was elected president. Later his opponents complained about changes going to fast and about corruption. One of the ways he ended the complaints was the destruction of a television broadcasting station. Notice that the prominent Sun and Mars (sesquisquare Zero Aries) in his chart are both connected to the midpoint Saturn/Pluto. That refers o.a. to a heavy struggle for power.

With the prominent Sun and Mars, the oriental Neptune and the tight squares between Sun and Uranus AND Venus and Mars the Georgian president has the astrological ID of a leader, a man of action and enterprise but with passions and ideals. Given the fact that his birth time is unknown we are left with half a fingerprint. But it is enough to see that the coming year is not going to be easy.In his solar return chart Pluto is also conjunct his Sun.
Geplaatst door Astromarkt op 9:43 PM