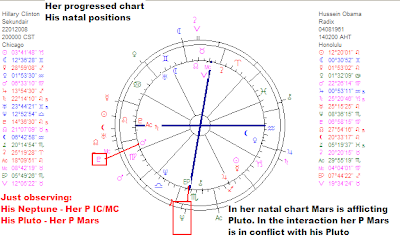 Have you read the article about relationships and progressed charts yet? No? Well, you should, as it is related to this drawing of the progressed chart of Hillary Clinton with the birth positions of Obama wrapped around hers. Notice how his Neptune is on her progressed meridian (his negative approach towards her goals) and his Pluto is conjunct her progressed Mars (for having a political - Pluto - fight - Mars -). Mars is in conflict with Pluto in her natal chart and this political competition activates that aspect of having to defend herself, using/abusing influence and power. She meets her equal. He has a 15d quindecile aspect between Mars and Pluto in HIS birth chart. That promises to be a real intense fight for power!
Geplaatst door Astromarkt op 8:05 PM