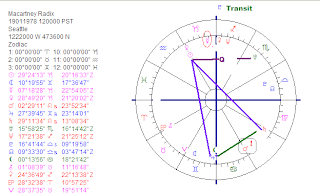 Scott Macartney had his 30st birthday today but it was not his lucky day. In his natal chart the Sun is inconjunct Saturn and of course that nasty aspect is due to repeat itself on his birthday. Saturn is the symbol of falling. Watch the movie...he fell real hard and is seriously wounded. As we donot have his HOB we cannot see if his Ascendant was involved in any way and we can only observe. Let us hope for the best...These are the observations:

Apart from the Solar transit with Saturn, transit Pluto was active. Pluto was semi sextile his Sun and sextile Progressed Sun and trine the natal Saturn. That might be a life saving aspect, as Pluto is well aspected and implies surgery and survival. It is the combination for the 'die hard'. But any aspect coming from Pluto is a challenge and transforming your life somehow. Maybe the drive to win (Pluto) even without not feeling too well (Saturn) caused the fatal unbalance. The quincunx or inconjunction is btw the aspect of unbalance....The Sun AND Venus are his chart the Apex of a closed Yod with both Saturn and Jupiter, indicating the disadvantages of fortune and the help and support in case of a fall. Jupiter and Saturn were today trine to each other and both were in aspect with Mercury, in a positive way.

The prominent Uranus (sesqui square Aries Point) quintile the Apex Sun and Venus might refer to the item of freedom and independancy. Let us hope that his injuries allow him to survive and stay independant. Because sport is calling in his chart (Mars without major aspects in sign).
Geplaatst door Astromarkt op 5:10 PM