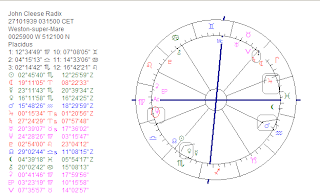 With his progressed Ascendant changing to another sign - sign for a change in relationships - John Cleese is divorcing for the 3rd time, after 19 years of marriage. Looking at his birth chart (27th October 1939 at 3:15 CET a.m. Weston-super-Mare) we see Jupiter (for 'multiple) in the house of marriages, the seventh house. Notice that there is an aspect that is frequent in the charts of those who marry more than once or never: Mars square Uranus. Mars in this chart is prominent (semi square Zero Aries and in Aquarius (ruled by Uranus). There is a very tight square between Sun and Pluto in this chart that makes me think about the hotel manager of Fawlty Towers: short tempered - Mars + Uranus - and fanatic - Sun + Pluto. This difficult square is trine and inconjunct Jupiter, so that a combination is built of Sun, Jupiter and Pluto (a key to sucesses). Saturn in his chart is calling! That tells us that he is ambitious and serious. You can see that he has the I.D. of an artist by looking at the oriental Neptune in the first house and Venus (just like Mars) semi square Aries Point. Venus and Neptune in prominent positions add to the idea of artistic talents. But besides Venus, Mars, Saturn and Neptune there is even a fifth prominent planet: Jupiter, conjunct Aries Point, in the 7th. This amount of important parts of his individuality tells us that John Cleese just had to 'make it' somehow.
Geplaatst door Astromarkt op 11:45 PM