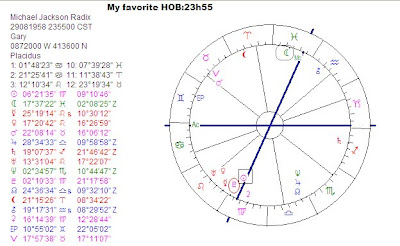 Michael Jackson has released a new version of 'The girl is mine'. He is planning shows in London, too. You might call it a come back. So let us see if Pluto (the come back dwarf) is present in his chart.

HOB FOR MICHAEL JACKSON
There are severable probable HOB's (birth times) for Michael Jackson, but I think the one Astrothème offers (10 a.m.) could be the right one. In that case the progressed MC is near conjunct the prominent progressed Pluto and that is a sign for a come back.

MY FAVORITE HOB
On the other hand there is a version of his HOB being 23h55. That would fit too. In that case the prominent Solar Arc Pluto is about to trine his natal MC. I have always preferred that one, the 23h55, because it has Moon in Pisces on top and because he is famous for his Moon-walk (Pisces for feet). But it needs correction, too. I found out that an HOB of 23h50 with an MC of 20d40m Aquarius (Ascendant between 16 and 17 Gemini) gives a progressed MC about 10 Pisces for the day that he was cleared of all charges (14th June 2005). On that day he must have felt relief and that shows! That Progressed MC was inconjunct Jupiter and conjunct Uranus (the 'Thank God' combination:).

MOONWALK
And the Moon in 17d04m Pisces is on top and square the Ascendant in the natal chart. That is a crucial position for the Moon in the sign of the feet (Moon-walk!). Chiron is right on top of the MC and Ceres on the lowest spot of the chart. Chiron and Ceres might refer to the extraordinairy position of this man.

Pluto rises before his Sun. That is symbolic for a focus on money, sex, influence, power and (in some cases) politics. It is also a planet of transformations. Venus in his chart is conjunct Uranus, a sign for pop artist and singers. And (in the astrological vocabulary) Venus-Uranus is symbolic for beauty-surgery, too.

If he was born at 23h55 the Moon on top is exactly (!) inconjunct Venus. That adds estetic senses (with a discrepancy included) and places the need for privacy (Pisces) and the family matters (Moon) above all in his life. Moon is ruler 1 in this chart and ruler 1 in 10 is also telling: he performs in public. He also uses clips and video's...not material performances...Pisces again!

NEPTUNE IN THE FIFTH
What is also an issue in his life is that he was suspected of child abuse. Look at Neptune in his fifth, sesqui square the Moon on top...It is one of the aspects the Dutch famous astrologer Ram mentioned as unfortunate for relationships with females in the chart of a man. There are more of such indications in the chart of MJ: Moon square Saturn is another one and Mars square Uranus (within orb because Venus is translating the light). With these aspects it is likely that he won't marry at all or have one or more divorces.

LOVE OF MUSIC AND MOVIES
Neptune in the fifth tells us that there is a lot of romance, secrecy and 'gossip' involved in his love affairs and it also reveals that music and fotografy or movies (Neptune!) are part of the show (V). Neptune rules the tenth equal house. Apart from the Moon inconjunct Venus, Neptune is making the tightest aspect, with Pluto. It is a supposed to be generational aspect, but this one is connected with the Ascendant and with the Moon. Moon is also related to Pluto by a quindecile of 165 degrees. A connection of Moon with Neptune and Pluto often implies paranormal sensitivity or...high sensitivity. And it is known that MJ suffers from allergies. But Neptune/Pluto combinations also involve mass media (the immaterial influence).

SURGERY
How about his changing appearance and 'beauty' surgery? Look at Venus conjunct Uranus. The midpoint is sesquisquare Zero Aries and semi square the Ascendant. It means that he is known for beauty operations and/or singing. Venus semi square Mars/Uranus means 'surgery on a female' but Venus is not just 'female' but also 'beauty and estetics'.

There are a lot of indications for successes as an artist. First of all Venus is quintile Jupiter for a creative way to be fortunate in love or as an artist. Secondly we see VEnus semis square Sun/Jupiter and Jupiter/Pluto.The closest midpoint combination made by Venus is a semi square with Neptune/Pluto.

SIBLINGS
The Jacksons were a group of brothers and sisters sort of being forced by the father to perform on stage.Sun conjunct Pluto in the 3rd house, the afflicted Moon on top and the crucial position of Mercury (siblings) on the IC (background) refer to that.

CLEARED
Michael Jackson is a controversial person (Uranus rules the MC and is sesquisquare Zero Aries). People love him or disload him. In 1993 (with the Midheaven changing sign) and in 2003 there were serious accusations about young boys but in 2005 he was cleared of all charges. That was on the 14th of June 2005 (http://news.bbc.co.uk/1/hi/entertainment/music/4604027.stm). On that day there was a very telling match with the birth chart for 23h55.

RISE AND FALL
In this 23h50m chart we see the crucial Saturn square MC in a hard aspect with the most individual midpoint: Ascendant/MC. That explains how he climbed and fell. And maybe Chiron on the MC tells a story about the wounded celebrity. For his carreer line we find Aquarius (techniques, provocations, changes) - Uranus (quindecile 75d Jupiter)- Sun <>Mercury on IC. Communications in a modern way...Gemini on the Ascendant is helpfull for dancing and is also pointing at his eternal youth (the Peter Pan syndrome as well as the outlooks).

COME BACK MOMENT
So now Michael Jackson wants a come back, if only to pay his debts. Solar Arc Pluto trines his natal MC, but transit Neptune is conjunct his MC. Usually Neptune is confusing, weakening and disappointing. But as Neptune is the planet of the artist, maybe it will not be so in this case and the conjunction is offering another starting moment. Besides, this HOB is speculation anyway. So let us look at his solar return chart. Hmm...using 23h50 he has Pluto on the MC and the Moon on the Ascendant: a come back Solar Return chart. If Solar Arcs work, then he will be a succes: SA Jupiter square Moon and trine Venus!
Geplaatst door Astromarkt op 8:55 PM

Please read the post about the death of Michael Jackson...
on this blog. Click the link or copy and past the address:

This blog about MJ
I corrected the earlier guess chart of MJ to 23:50. You see, Michael Jackson's hair got on fire on June 27, 1999. In a 23:50 chart that is with progressed Ascendant sextile Mars and transit Uranus trine Ascendant (reflecting the perfect moment for an accident) and transit Neptune sextile Midheaven. Also progressed Mars is inconjunct Neptune, 75 degrees from the natal Moon and square natal Pluto (for getting hurt). It was shortly after progressed Sun trine Midheaven.

When he died transit Saturn was square natal Ascendant, at the lowest part of the chart, a rather important spot in the circle. Also Saturn is ruling the eight house (see the chart below). The Moon in Pisces remains on top.!His true hour of birth is still not known!.