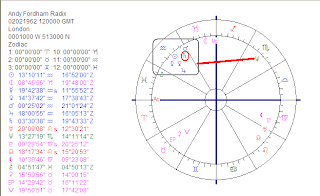 Andy Fordham the darts player who lost a lot of weight in 2007 is called 'the incredible shrinking man' in The Daily Mail. He lost so much by drinking less since cirrhose was diagnosed.

Andy Fordham was born February 2, 1962 in London. 60% of his positions are in the airsign Aquarius. This stellium in Aquarius could be regarded to be completely square Neptune, by translation of light. But the closest square is between Sun and Neptune and that square never moved and remained vital and vivid in the life of Andy Fordham. Neptune went retrograde around his 11th birthday and moved slowly backwards, always being within 1 degree of orb with his natal Sun. Neptune is a.o. the planet of addictions and alcohol. Neptune is prominent in this chart (sesqui square Zero Aries). Uranus is dispositor of Aquarius and in his chart 'calling' (not making major aspects in sign). Progressed Sun inconjunct Uranus and progressed Neptune square natal Sun marked his 2007. Fortunately 80% of his positions is in fixed signs and that will give a strong will to succeed in regaining health.

About alcoholism and astrology: there is a study done by Astrodatabank....