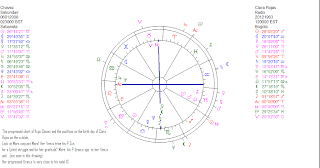 As it seems, Clara Rojas will not be released, but her son (with a FARC-father) will be with his grandmother soon. This happens with transit Mars opposed to her Sun and transit Saturn is still conjunct her progressed Uranus. Jupiter and Pluto moved away from her Sun. In her solar return chart the tightest aspect was that of Sun conjunct Pluto. Often that is a challenging and sometimes a dangerous aspect. Let us hope she will be free later this year, before progressed Sun inconjunct Progressed Pluto later this year (and in the circumstances in the jungle).
Jupiter and Pluto transit Sun
Jupiter conjunct the Sun, combined with Pluto is very stimulating for confidence and trust. There is a person (Ernest Louwes, born 13th August 1953) in jail in my country (Holland) who had Jupiter and Pluto trine his natal Sun when the Supreme Court was investigating a testimony. He and the persons who believe he is innocent were very hopefull that this could lead to a review of his case. But now the transit has gone and the man is still in jail, without being given notive of the results of the investigations. In his solar return the Sun opposes Neptune.
Circumstances
We should consider the special circumstances of both (in jail) and the dangerous position of Rojas in the hands of criminals.
Chavez, Saturn on IC
Unfortunately there is no hour of birth available for Clara Rojas or her son, so that only half of the necessary data is there. We do have the chart of Chavez, however. It would be a succes for him if she had been released. This combination of transits influence his chart right now: transit Jupiter inconjunct Sun, transit Saturn oppsosed to the MC. That means that Saturn sits on the lowest spot of his chart (and so is his status). HIS chart couldd have told us before that he would not succeed, perhaps. The faith of the common people in political cases relies on those with power...
Synergie
His progressed chart is connected to her natal (see drawing) with Mars conjunct Mars (a joint fight?). Let us hope that Clara Rojas is happy to know that her son (there is another DNA-test being done in Spain) is alive and well!

See the other message about Clara Rojas...
For the synergy in progressed charts reed the article about the right or wrong moment for meeting persons seen in an astrological light.