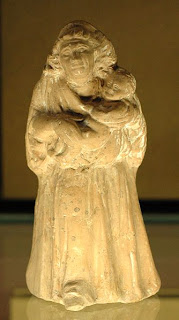 Driving in my car I heard an interview on the radio today. A 102-year old, celebrating her birthday today, was being congratulated and honored for the fact that...she takes care of her 72 year old and ill daughter, since two years. She cooks, washes and cleans. She does this almost always alone. That is very special. It drew my attention and I had a look at the chart of the d.o.b. of this very old lady, who also emigrated and returned (in 1972). What of all that can be found in the chart?

OLD
There is a balanced placement of planets and light in all elements. 50% of the placements are in movable signs (so I guess she is a busy person). I was curious about Jupiter/Uranus (often found in the charts of very old persons) and yes: Sun is semi square the midpoint Jupiter/Uranus!
For more about astrology and aging, see my site Astromarkt about getting old.
There is a limited ability to read this chart, without hour of birth, but here are some more observations:

VOLUNTARY JOB: MARS TRINE NEPTUNE
I am happy to see the trine between Mars and Neptune in her chart. Her voluntary job to help her daughter seems to be in line with this aspect: driven by empathy.

MOON CALLING
Family and tradition calls when the Moon is calling (not making major aspects). That is mirroring the living with her daughter, having a niece who helps to clean the house once a week and getting back to her home land after emigration.

INTERNATIONAL: EMIGRATION AND BACK
Mrs K is an international (Jupiter is 'calling'. There are no major aspects within 5 degrees of orb). One daughter  lived in Australia until her death. Another daughter came over from South Africa, the country where she lived for many years until she and her husband returned to the Netherlands in 1972 (that is when she was 63!). There were three indications for this return.

1. The progressed Sunsing changed from Leo to Virgo, with Progressed Venus square natal Sun. The first aspect in the new sign was Progressed Sun semi square Neptune.
The changing sign of the sun mirrors the changing lifestyle. Sun-Neptune is reflecting a negative period in life. Soon after the return her husband became ill and died.

2. Transit Pluto was square natal Sun in 1972 and Pluto is the symbol of transformation of life and issues of life and death.

3. Transit Ceres was conjunct natal Sun in 1972 (Ceres is the symbol of the roots)

QUATRONOVILE SUN-URANUS
BTW Notice the quatronovile between Sun (90d) and Uranus (290d). This 160d aspect symbolizes rejoicing independence and freedom. If the novile (binovile and quatronovile) represent the ninth harmonic and if the ninth harmonic is the symbol of the 'fruit of life' (where the birth chart is the 'tree'), the fruit of life of Sun-Uranus might be 'being independent'. Few people of her age managed to be as independent as she is now...