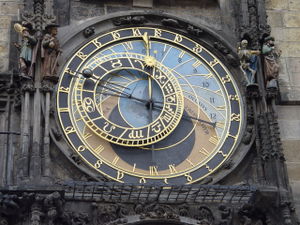 When someone asked me about rectification of the time of birth and the answer was more than one page (...), I decided to blog about what I think of it. Students in astrology often spend months to find the ultimate minute and second of their birth time to erect their horoscope with proper Ascendant and Midheaven. The goal is to be precise in future, too. It is a nice way to learn more about astrology, but, can it be done, really? Is it possible to find the ultimate minute and second of birth? I think not. Because, if it could be done, why are there so many systems, why does Bernadette Brady say in her book ‘Predictive astrology’ that she experienced that there is a substantial group of people who's lives don’t seem to correspond with the transits and progressions? Why was there an astrologer who invented a system named ‘Minus one’ (one year!). Why weren't the guess charts for Obama the right charts? And why did I stop searching for my 'correct' birth time? I found that my official time of birth was right in the middle of the possible corrected birth times with a difference of 10 minutes to either side. What is the purpose of the amount of work to find the ‘correct’ time, when there is so much to consider?

Coming events cast their shadows before
You don’t get married all of the sudden and surgery is the next step in a disease or after an accident.

Major events are complex (mind the rule of 3!)
You are not going to die and you will not get a better job because of one single aspect. There are more than 2 important indications in the chart for important times (short term and longer term). My advice: analyse the combination of these indications (see the midpoint range on this blog).

It is a good thing that we can’t know it all…
Some things just happen and we don’t know why, yet. Think of the story of the butterfly and the storm…
Too many things to consider…
Take Pholus…Who had heard about Pholus a few years ago. Now I see the transits of Pholus related to the start of turning points in life. And how about midpoint combinations? Or the minor aspects?
You need to have a helicopter view of the situation and consider the progressions and transits before and after a certain moment in time (how did you get at this point and how might it continue).

Sometimes nothing happens
(like when transit Jupiter was in my 12th house).
One single transit mostly doesn’t mean a lot.
It takes more to tango…

The charts of influential people might be ‘leading’.
- Coaches’ charts and the results of the team…
- Chart of your husband (in particular when you depend on his job!)
- Chart and position of the leading politician in times of war and the effects in your daily life.

So, if you (still) wish to spend a lot of time to find your ‘true’ birth time, don’t spend too much time on it. I did what you did and after many many hours, weeks and months my conclusion was that I was born at the official time and that the corrected times were up to 10 minutes before and after that official time. The thruth was in the middle…

!There are many examples of transits and progressions in practice on this blog. What you see is that they are seldom exact and often sketch a situation creating the conditions for further events. It is the combination that ‘does it’ and that makes it difficult if not impossible to find the exact second of your first breath. Also, when you want to have a look into the future, you can’t. Future changes. Times change. Right now, when I write this, things have again changed forever and my view of the future will have to change, too. Times flows...Your idea of what happened many years ago, may have changed to. You now see them in the light of today....