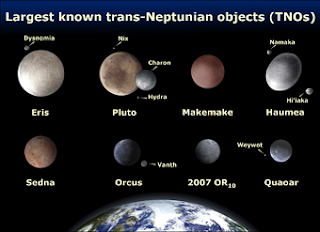 This blog is about Saturn afflicting Orcus or vice versa. Example: Barack Obama.

President Obama is running for president again. Sometimes the polls are good (during transit Jupiter inconjunct progressed Sun, for example), but there is also a negative tendency reflected by the quincunx of Neptune with his progressed Sun. That transit comes back more often than Jupiter does and will still be active in November 2012, election time. There is little balance in the positive and negative view of the to be expected results. And there is more...Right now Saturn is square his progressed and natal Orcus. The final 'hit' is July 7. It doesn't 'sound' like a happy transit and this transit is important for Obama for a few reasons:

1. In the natal chart of Obama Saturn happens to be quindecile (that is a 165d aspect) Orcus...and
2. his Orcus is conjunct the midpoint Ascendant/Midheaven
3. Saturn is elevated in his progressed chart
4. He has a responsible (Saturnal) position

This all makes Saturn-Orcus quite important. And that means that the actual transit will resonate louder than in the charts of other people, who were not born with a Saturn-Orcus minor or major aspect.

When President Obama was elected, he promised change (yes, we can). More than 3 years later the people think that things changed the bad way and they blame him. Over 40% think that the economy was better off before he became the President of the USA. That is heavy and Saturn is the symbol of what is heavy.

Here is the chart for now:

ORCUS
See more about Orcus... on this blog. Read about the reflection of Orcus in the charts of divorced couples (like Charles and Diana, Jesse James and Sandra Bullock, Tiger and Ellen Woods, John Lennon/Yoko Ono) and the Saturn-Orcus-Sun-combination in the chart of Mussert. In 1941 he swoar to follow Hitler (and this oath was kept a secret, even to the members of his movement). After the war he was executed. His Orcus is sesquisquare Saturn, Saturn is inconjunct Sun and Orcus is 75 degrees from the Sun.   http://astropost.blogspot.com/2010/08/orcus-oaths-and-link-to-ephemerides.html
A less dramatic Orcus is showing up in a chart when contracts need to be signed (for example, a mortgage). See:http://astropost.blogspot.com/2011/04/transit-orcus-contracts-and-oaths.html
A specific case is the relationship between John Edwards and Andrew Young. I quote my blog about them:


...the Orcus of Edwards is exactly square the Mercury of Young. Orcus is the deity noted for punishing those who break oaths. The Orcus of Young is conjunct the Ascendant of Edwards, who has Mars conjunct Orcus. In fact, both of them broke oaths...


MORE LINKS ABOUT YOUR ORCUS
The Green Duck provided a handy selection of ephemeredes so that you can find out where your Orcus is…and where Orcus is today.
http://www.thegreenduck.com/ka/NewPlanets/Orcus-eph.shtml

MORE ABOUT ORCUS on Wikipedia (about the object) and about the myth...

Link to all posts about Obama