Chart with a time of birth for Casey Anthony 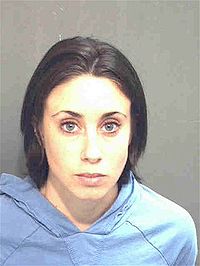 On May 29 I wrote about the Casey and Caylee Anthony Case. I mentioned the assumed birth data of the mother (Casey Anthony). Today someone informed me about the hour of birth and the place of birth of Casey Anthony. So I again had a look at the charts. I’m glad that I don’t have to judge this. It seems to be a very complicated case. Luckily, I am just a blogger about astrology, so I simply present the chart and tell you what I see.

SATURN, SATURN AND SATURN AGAIN
The most interesting thing is that transit Saturn keeps coming back in this story. In short: what I found was that Casey Anthony has a birth chart with Saturn inconjunct Midheaven (reflecting a bad position including lost of respect) and involved in a Yod (Moon-Saturn-MC). Saturn is at the apex of the Yod with Moon and Midheaven. A finger pointing at Saturn is a finger pointing at (for example) parenthood, responsibility, criticism and depression.

Any transit with Saturn will be important because of the position of Saturn in the natal chart. The transits do mark the most important periods in her life:

1. She had transit Saturn square natal Sun in June 2008 (when Caylee was reported missing).
2. She had Transit Saturn exactly inconjunct progressed Sun when the dead body of her daughter was found.
3. And transit Saturn will again be inconjunct her natal MC, as it was in the past few months.
Here are the chart for the given data, thanks to the person who mailed me, some more observations about the natal chart,  more also about the transits and the progressions  of 2008 and of course the synastry with Caylee.

Continue for the details...


This chart, like Casey Anthony, has double messages. Perhaps that is also because of the Sun/Moon in hard aspect with Neptune (ruler 8th house of life and death, in the 5th house of children). Though also guilt (Saturn) and keeping up appearances (Moon-Saturn) is a keen combination for having a bad memory. Also watch Mercury's aspects with Uranus and Pluto for the controversy caused by what she states and the probably very nervous state of her mind. I quote myself about Sun/Moon with Neptune: 'What we see is not true or real'


SO MUCH DEATH
There is a range of indications of the issue of death and unnatural death in the chart of Casey (which is understandable, even if she is not guilty). These indications don’t necessarily lead to such a trial. The Sun/Moon with ruler 8 in 5 might be just coincidence, but if not: it is very well describing the chart of someone who might loose a child.


And the nasty transits of Saturn in the period that her daughter was missing and found dead only point at depressive situations. It would be easy if charts showed guilt or innocence, but they don’t. I am always interested in what charts have to say in such cases (given the circumstances). Had we not known about the death of her child, we would perhaps see the 5-8 house connections and her as the party girl (Jupiter ruler 5 rises before the Sun, ruler of the Leo Ascendant).


I always say that it takes more than 2 indications at the time for something important. When little Caylee disappeared (mid June 2008) this chart had opposite indications. On one side there were restrictions and depressing situations. On the other side there were great moments.
1. In the first week of June transit Saturn was exactly square Progressed Midheaven: a bad turn, resonating the Saturn-MC inconjunction in the natal chart. That is a bad turn in destiny. Transit Saturn was also conjunct Eris and trine Pholus, meaning bad discord and final turning point. Transit Saturn is close to Ceres and Ascendant of the progressed chart.
That is a lot of Saturn and that is a lot of asteroids, too. It makes me think of a sad disaster.
2. But there were also signs of positive change: Progressed Moon conjunct Midheaven and sextile Progressed Jupiter (the most happy progression a person can have, normally). The Progressed Moon was sextile Moon (easy way out for emotions). Progressed Ascendant had just been trine Mars and opposition Jupiter (it was after a sort of a success).
This strange combination that drew the media’s attention is also visibile in the charts.

When the dead body of her child is found, transit Venus is on her Midheaven, as if a wish came true. Transit Chiron square Progressed Moon however reveals hurt. It looks like mixed feelings.

But the most important is transit Saturn EXACTLY inconjunct progressed Sun. This was a bad day for her. It is Saturn again!


a. The mother's situation when Caylee was born
When her daughter was born, the Progressed Midheaven changed sign. That is one of the indications for the correctness of this hour of birth. When the MC changes sign, your goals, status, position (in the family, rank) changes. Caylee became a mother with:
1.  that changed sign of Progressed Midheaven
2.  the Progressed Ascendant conjunct Ceres and trine Pholus. Ceres is the symbol of motherly care and Pholus of the turning point.
3. Progressed Venus opposition natal Pluto during pregnancy and Transit Mars opposition progressed Pluto. Does that tell us about the death of the natural father?
4. In the progressed chart Venus is exactly sesquisquare Uranus (symbol of giving birth, maybe with the help of techniques).
5. The close inconjunction of Moon and Pluto in the progressed chart suggests that the birth was a painful or intense emotional experience.
6. And Mars is conjunct Neptune in the 5th house, getting closer and closer. Something goes wrong...

b. Synastry with Caylee
There is little interaction between the natal chart of the mother and the positions of the daughter. Mercury-Midheaven, square (acknowledgement). Jupiter-Venus (joy). That is all.

c. Caylee's difficult aspects
The little girl has Sun opposition Neptune and Mars afflicted by Saturn and Pluto. Those are heavy aspects that require a solid environment to be used well and to avoid dangerous situations.

The charts seem to do what they should do. They reflect the possible ugly story of nasty aspects in certain situations. It is a complicated case because of all the conflicting stories that requires all the wisdom a jury and a judge can have.

If this birth time is correct then it looks like transiting Jupiter would bless her midheaven. I hope Casey does not get away with murder. At the very least she needs a life sentence as far as I am concerned. I do see her venus in Aries in the 8th in the sign of its detriment. What do you say with the current transits as to the outcome of her trial?

As you see in the case of Dominique Strauss-Kahn, you never know...

PS today might be the day of the jury 's verdict and the transit of beneficial Jupiter will be in March 2012.

Let's just not throw a speculative birth time up and hope it sticks to the wall.

The person who informed me found the hob on Tyl's forum.