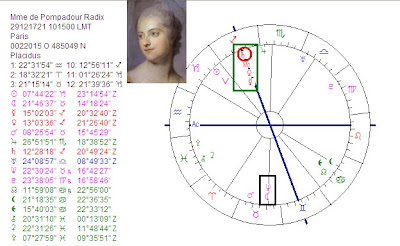 Venus and Saturn dispose of Taurus and Capricorn. Her Sun is in Capricorn, her Moon is in Taurus. The midpoint Venus/Saturn is conjunct the Midheaven and is repeated. Venus is conjunct Saturn/MC and Saturn is conjunct Venus/MC. This combination of the business of love and marriage (Saturn and Venus, arranged marriage) is ruled by the planet on top, Jupiter.

B. Moon, Neptune and Ascendant are in tight aspect, too, so that there is 3 times a combination of the 3 positions.

C. The combination of Saturn and Neptune is also of importance. Maybe that is indicating illnesses. In the solar return chart of the year of her death Neptune is opposition Midheaven. In her natal chart Neptune is at the North point, square ASC, reflecting possible vulnerability.

Venus+Saturn+MC >>>Jupiter...how to read that? I think it means ups and downs in her status and position as a woman.

Madame de Pompadour was married with a decent partner (selected by her parents). Her father may not have been her natural father and her mother was a prostitute before she married. She had children with this man. Life was not just luxury for her. Madame de Pompadour lost a child a year after he was born.

When the mistress of the king died, she was introduced to him and became his lover. That was in 1745, soon after her Sunsign changed in progression and in the year that the progressed Moon made the most fortunate aspect of them all: Moon trine Jupiter! A divorce was arranged. It seems that she had a special interest in literature and in her natal chart we see part of the pattern of artistic talent: Moon conjunct Neptune on a crucial spot and Venus on the Midheaven.

She remained a friend of the king, long after their sexual relationship had ended. But at a certain point it was all over. She was blamed for a war against Austria (Saturn on the MC!) and later she died due to tuberculosis, only 42 years old.
Geplaatst door Astromarkt op 10:19 PM