The printed magazine of Amnesty Netherlands ('Wordt vervolgd') has an article about Eleanor Roosevelt's 'shadow'. Eleanor Roosevelt gave the world the Universal Declaration of Human Rights. How do seven 'First Ladies' and one 'First Gentleman' follow in her footsteps? It is maybe not very amazing that Liu Yongqing (the silent wife of Hu Jintao) is overshadowed by Eleanor, but it may surprise you that Laura Bush ended as the number 1 on the list and named the official heiress of Eleanor Roosevelt, for several reasons. She personally called Ban Ki-moon after the demonstrations in Myanmar and she does a lot for the education, alphabetism, and health for women, prevention of AIDS in Africa and the situation of women in Afghanistan.
So both first ladies worked on human rights. And what do these first ladies have in common? It is a prominent Uranus! 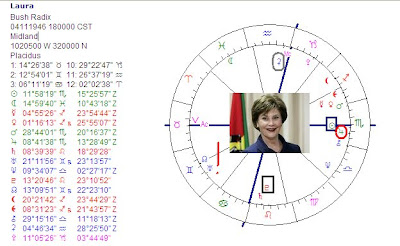 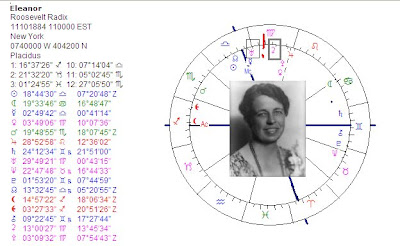 PROMINENTLY CALLING URANUS…
Uranus is 'calling' these ladies! In the charts of both ladies Uranus is not making any Ptolemaic aspect in sign or orb 5 degrees. In the chart of Eleanor Uranus is on top and rising before the Sun and Mercury, so that she has an orientation on the theme of Uranus.
And in the chart of Laura Bush Uranus is square the midpoint ASC/MC and 157.5 (sesquisquare + half semisquare) from the midpoint Sun/Moon. That means that she is all in all and in heart and soul Uranus-minded.
We all know that Uranus when it comes to vocations means that you want to make the world a better place and to help people.

HER URANUS TRINE MC OF LAURA
Isn't it interesting that the Uranus of Eleanor Roosevelt is at 29d49m Virgo and Laura Bush's Midheaven is situated at 29d23m Capricorn? That links the prominent Uranus of Eleanor - symbolizing human rights at any level and above all- in a positive way to the 'vocation' of Laura Bush, strongly going into the same direction.

CERES: the lady on top
There is another position that the first ladies share. Both Eleanor and Laura have Ceres on top of their chart. Ceres symbolizes the goddess of nutrition, of genes and seeds but is always also the symbol of an important motherly figure. A first lady is a sort of a ‘mother of the nation’ and both had this position.

LAURA’s TRANSIT JUPITER
Right now Jupiter is in the final degrees of Capricorn and there will very soon be a conjunction with the Midheaven of the first lady who married the most unpopular president the USA ever had. But in HER chart we see a moment of success. And maybe it is just that appreciation coming from Amnesty International. Perhaps it is a welcome article these days (with transit Saturn and Uranus afflicting Uranus and Sun/Moon) now that she is forced to step back as a first lady and move to another place.

Here is the link to the (Dutch) article on the site of Amnesty Netherlands...
Geplaatst door Astromarkt op 8:28 PM