The difference between Patti Smith and Berti Vogts

On the 30st of December 1946 Berti Vogts (football player and trainer in Germany) and Patti Smith (rock singer, song writer) were , about 5 quarters of an hour after each other and with the Atlantic Ocean between them. Seek the differences in their charts: 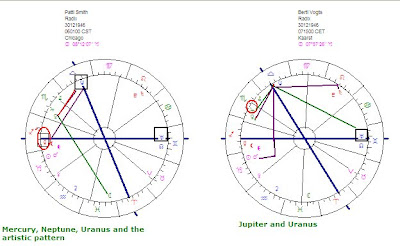 PATTI SMITH
Patti Smith has the pattern of talent in her chart. Neptune is conjunct the midheaven within 1,5 degree of orb. Venus is semi square Neptune and tightly trine Moon in Pisces.

Vogts has Neptune too far away from the Midheaven to be called 'conjunct'. He has Moon in Pisces, too, but the trine with Venus is a few degrees wider than it is in the chart of Patti Smit. Both have Sun connected with Saturn and Pluto by minor aspects (inconjunction and biquintile) but in the chart of Vogts the aspects are tighter.

The Midheaven of Patti is related to Mercury (quintile), Venus (semi square) and Neptune (conjunction). This expressed artistic talent used for a profession (Venus+Neptune) and creative communications.
The Midheaven of Berti Vogts is connected with Venus (semi quintile), Mars (binovile), Jupiter (semi sextile), Saturn (quintile) and Uranus (trine). That means that he has good insights (Jupiter and Uranus) and is a creative manager (quintile with Saturn) and that a certain passion (Venus+Mars) is involved in his career.

It is just a bit more than one hour and an ocean away, but the there is also a difference in their chars that starts unfolding itself in a picture created by constellations, positions and distances. The picture of of Patti is that of a person creatively communicating in a rebellious or controversial way, but always using her artistic talents. That of Vogts is that of a creative manager with a passion, a 'die hard' international who uses good insights in his career.

But there is something that they both have in their chart: Sun inconjunct Saturn for example. Vogts lost both his parents at age 12. Patti lost her husband, in 1994 and shortly later her brother. She was raised in a Jehovah's witnesses family (Neptune is often symbolizing religion, too).

It is clear (well, to me:) that tight aspects make a difference and that they make an important difference. But there is also, of course, the difference in gender, culture, class, nationality and genes that alter the perspective of the chart. Still, I think the differences in the charts of Smith and Vogts are appealing.

BTW Patti Smith is also known for her political actions (think of the Saturn-Pluto pattern). Click here to see the article on my site Astromarkt.
Geplaatst door Astromarkt op 11:55 PM