KATRINA AND THE DOWN FALL OF BUSH 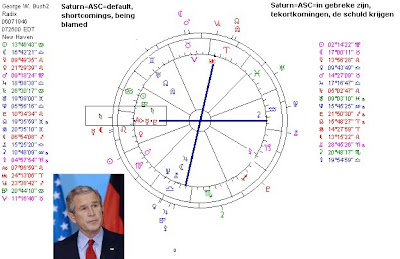 The late and limited reaction of Bush (and his administration) following the disaster caused by the hurricane Katrina on 25 August, 2005, was (according to biographers) the moment of the down fall of George W. Bush. It is also the moment that transits of Saturn and Pluto (two prominent planets in the natal chart of GWB) hit the cornerstones of his natal and progressed charts. Things went wrong (Saturn) and life at the Oval Office became difficult (Pluto). He entered a period in his life filled with hectic situations and controversies (Uranus = ASC/MC in the progressed chart) or...he became controversial at that moment. Note that Uranus is the planet rising before the Sun in his natal chart! The most important planets in his natal chart were on the angles of his (progressed and natal) chart, indicating a crucial moment in life.

In the natal chart of GWB Saturn already makes a square with the Midheaven, telling us that there might be a hard end to his career (among other things). Pluto is angular and that is a symbol of the meaning of power and politics in his life. The prominence of the two planets makes the transits of Saturn and Pluto extra important.
Sun and Pluto are 'calling' in his chart. The prominence of Uranus is an indication for the importance of the later progressed square. It is easy to see the combination of the controversial political leader and manager (Uranus, Pluto, Sun and Saturn are prominent).

The biographers are right. Katrina (or the way he dealt with the hurricane) meant the end (Saturn on ASC, Pluto opposition MC) of the political career of Bush, problems (Pluto) with his status and position (Saturn and MC) and hard political confrontations and the start of being the most controversial president of the USA ever. ...And all that happened with progressed Sun/Moon conjunct progressed Venus and Jupiter, just when he needed to relax and enjoy a nice and easy life. It is also THAT midpoint combination that promises support. That is maybe the reason that he still is the president, in spite of the hard transits in August 2005. 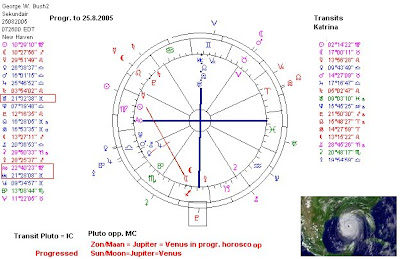