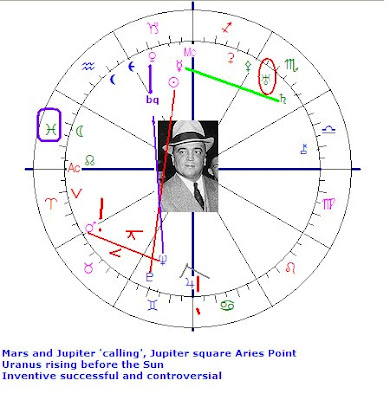 One of the persons born January 1 is Hoover, the 'founder' of the FBI. I have a 7 a.m. time in my computer file, but I learned that the time of his birth is a mystery still. So I limit myself to the main problem in his chart (Sun inconjunct Pluto). I am also interested in his Venus biquintile Neptune. Should he have had a creative way to express artistic talents or romantic feelings? Maybe he expressed them when he was dressed up as a woman. And how about the lack of placements in fire signs and Mars making no Ptolemaic aspects in sign or orb 5 degrees? It explains his anger and drive.

J. Edgar Hoover was born 1 January 1895 at ? in Washington with Sun inconjunct Pluto. Sun inconjunct Pluto (IMO) reflects not having a balance in self control and self value. It is either too much or too little but it is always hard for a Sun quincunx Pluto to deal with enemies and difficulties in a more balanced way. He was the man in charge in the FBI for over 40 years. He had the kind of power that no one should have in a democracy. And maybe the basic background of that power control was that he had to control himself and knew what he was hiding. That made him jealous, suspicious and dangerous.

RELEVANT
Read about the effect of missing elements and lack of aspects in the article on Astromarkt...
Geplaatst door Astromarkt op 1:19 PM