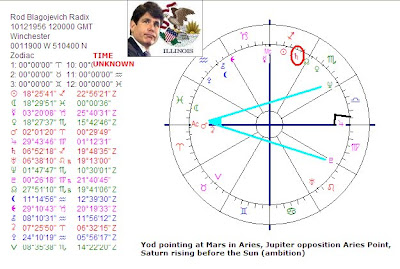 Mars inconjunct Neptune, that is the tightest aspect in the chart of Ron Blagojevich, the governor of Illionois who has been impeached. Mars is also inconjunct Pluto and the Apex in the Yod that is produced by Mars, Neptune and Pluto. Today transit Pluto square his Mars activates the existing affliction in the natal chart.

There were allegations that he abused his power, that he was corrupt and tried to sell the appointment to fill President Obama's seat in the senate. That happened with transit Uranus and Saturn square his natal Sun and possibly also aspecting his natal Moon in Pisces.

INCONJUNCTION
An inconjunction indicates disproportion and lack of balance due to or as the consequence (like lost) of the fact that something has gone wrong. Neptune and Pluto together symbolize the silent or secret force and power. Mars is the symbol of action, acts, energy and work. Mars inconjunct Neptune and Pluto = working behind the scenes abusing power without balance, a disproportional secret force at work. The consequences of these efforts are clear today. And they are especially strong because he actually had a position of power.

Now he lost his job, he can no longer be a governor or politician. This happens to him with transit Pluto square natal Mars and trine progressed Mars, activating the existing natal aspect. He also will face progressed Mars opposition Neptune in the coming year. He will have to face the judge in this matter. And that is a lot of consequences for trying to sell a seat to the most bidding Democrate. He compared it with his hanging. The inconjunction's effect is apparent.

More about Neptune and Pluto's effect

Recent post about a CEO stepping back with 4 inconjunctions...