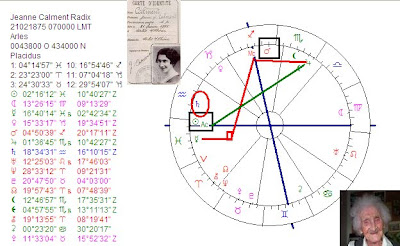 My first publication on the Internet was an article about the differences between the charts of those who became very old and those who died young. That was in 2003. You can find the articles about this study here:
- about differences in age
- about aging

Jeanne Calment was the eldest woman ever. Her parents also became very old. But nevertheless: what in her chart helped her achieve that? Let us see how her chart is corresponding with the charts of others who became rather old...

1. Uranus is prominent ('calling')
to show us that she is an exception...
In my book Astro I.D. there is a chapter about the oriental Uranus in the charts of a few very old persons.

3. Saturn is oriental
That is for being cautious and serious.

4. Mars on top, square ASC
She was above all an active person. She still rode her bike at age 100.

6. Sun not only trine Jupiter, but also binovile Uranus
The Sun-Jupiter-Uranus combination reflects being inventive and is a combination that I often find in the charts of very old persons. Jupiter is also 157.5 Sun/Uranus

7. Mercury sesquisquare Jupiter
She was mentally OK till the end and probably used her brains communicating, reading etc.

SMOKER!
Madame Calment smoked until she was unable to light the fire herself. Mars biquintile Neptune reflects the creative use of drugs.

DEATH
She died on August 4, 1997, shortly after the trine of progressed Sun with Jupiter (repeating the natal trine!). Jupiter is in her natal 8th house of life and death. The Sun had changed sign in progression (1,5 years before) and changed health or lifestyle. Transit Jupiter was sextile progressed Midheaven in a period of transit Jupiter square Sun. In other words: she had a very good doctor when life became a problem.

RELEVANT: AUNTY JO
Aunty Jo from Amsterdam is in the newspapers today because it is her 102nd birthday! She was born with Uranus rising before the Sun (oriental). She also has a 'calling' Jupiter. Just like in the case of Calment, the combination of Jupiter and Uranus is active.

Click on 'old' in the labels below to see more examples.
Geplaatst door Astromarkt op 9:15 AM