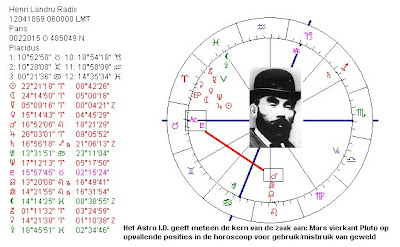 Most people don't have such explicit charts as the people who are famous or notorious. Extreme persons (most of the time) have extreme charts. A perfect example is the chart of Henri Landru, the man who killed 10 widows for their money and who was sentenced to the guillotine with evidence based upon papers. Look at the chart and the first thing you notice is that Mars is on a crucial spot down in the chart, square Ascendant and angular Pluto in Taurus. When you start calculating, you will notice that the vital importance of Mars and Pluto is being confirmed by the fact that both planets are related to the midpoint Sun/Moon (in the 22.5 degree range). Mars rules Aries and Henri had a stellium in Aries. And Pluto rules Scorpio, opposition his ASC, ruling the 7th house of 'the others'.

When you think of what he actually did, those positions say enough (if you are an astrologer). Mars and Pluto combinations intensify energy and drives. The combination can be used in sports or politics. But Landru was a common man in the late 19th century. And he had a 'calling' Mercury, ruler 2nd house...When Mercury is calling, you just have to communicate, even if you want to keep secrets. And so he made notes. This paperwork was the evidence.

Of course there is more. How about Mars trine Saturn? The combination of Mars, Saturn and Pluto can (CAN) make a person unscrupulous; a 'die hard' in whatever he does, linking business to a strong drive (and possibly sexual drive).It is a dangerous combination of 'unnatural death' as an issue in life. In his chart it is an important issue, because Mars and Pluto are important. In the end, he was murdered, too.

Another thing is that 70 percent of the positions are in fire signs, reflecting a sort of an overdose of energies. That is compensated by having no placements in air signs. Mercury (ruling the 2nd house of money) does not make aspects in sign or orb 5 degrees. That is a double call for communications at any level. He just had to make notes and those notes killed him.

There is a pattern of talent in his chart constructed by the stellium in Aries square Midheaven. It seems that he was convincing in his act as a rich widower who wanted to marry the rich widow.

Landru had a false identity and several false names. Notice Sun conjunct Neptune and square Midheaven (for 'faking' in public). And think about Josef Fritzl's Sun-Neptune combination for having a double life: click for the post about Josef Fritzl).
Geplaatst door Astromarkt op 6:48 PM