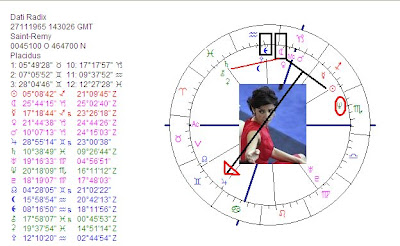 Rachida Dati is very ambitious and successful. She is also independent and she might want to be drawing attention at any kind of level and sometimes the way she does it is rather disproportional. Since she became a member of the French administration, new (Uranus) challenges (Pluto) easily came into her life. At the moment she is in the news (and controversial).
Rachida Dati is the first Minister of Justice who gave birth to a daughter (Zohra) who has an unknown or unnamed father ( The Virgin Bride, according to The Independent). Rumours say that François, Sarkozy's brother, is the father of Zohra. She is being ridiculed as 'Supermum' because it took her only 5 days to recover from giving birth and get back to the office. Blame Uranus for that! Transit Uranus is now opposition her natal Uranus (in the equal 5th house of children and ruling the equal 10th house of profession). Or should we blame the inconjunction of Jupiter with Jupiter, for the 'happy mother, but...'.

MOON AND SATURN
Natal Saturn is exactly conjunct natal ASC/MC, semi square the important elevated Moon. That is a statement for a manager, someone in charge in a hierarchy. It seems that Dati is a very authoritarian person. The explanation for this is the combination of Moon in Capricorn on top semi square Saturn. This reflects the need to be in charge and responsible and...respected. Sense of business and ambition probably lead to motherhood later in life. The way that people see her attitude is also explained by the inconjuction of the Sun.

SUN, JUPITER
It is easy to see her rise, with the calling Jupiter and Sun (just out of orb opposition Saturn). Jupiter is involved in a midpoint Yod produced by the opposition with the important midpoint Sun/Moon. As Venus is 157.5 degrees from Jupiter, in the 22.5 range Venus is also involved with Sun/Moon. The combination promises success in art or...as a female. She is very good looking. But there is a certain disproportional attitude (inconjunct Ascendant), perhaps overly arrogant or 'bossy' or 'showing off' (Sun). As the Sun is 'calling' (not making narrow Ptolemaic aspects) this attitude or approach can be at any kind of level. The fact that she wore a precious diamond ring that caused some uphevel is astrologically typical. The Sun disposes of gold and diamonds.

INDEPENDENT
Uranus is 75 degrees away from the Sun, so we may expect a strong focus on being independent and free and different (and that it is often the way to be controversial). Uranus is conjunct Pluto in the natal chart. Neither Uranus nor Pluto moved much in progression. They started retrograding. So throughout her life there have been 'impulses' and sudden changes. And as they occur in the house of children, why shouldn't she have an unexpected and controversial life changing event regarding (pro-)creation.

Besides Sun 75 Uranus there are more indications for her unmarried status. Venus is trine Uranus and that reflects a desire to be surprised and live life the adventurous way.
Mars is sextile Saturn (ruler MC), very tightly. The elevated Capricorn Moon is semi square Saturn and 15 degrees away from Mars. It is a statement for an ambitious woman, working hard to get to the top.

THE PROGRESSIONS AND TRANSITS SINCE HER RISE
1. Sun
The prominent Sun was conjunct Midheaven in progression when she became Minister of Justice (May 2007) and a sort of an icon of ethnic diversity. The combination of a prominent Jupiter and Neptune is also reflecting having fans and followers.

2. Pluto and Jupiter
Transit Jupiter was square natal and progressed Pluto on the day that she became member of the Sarkozy administration and Pluto was opposition Jupiter. Jupiter with Pluto is a combination for success.

3. Soon afterwards there was a progressed trine with Pluto. Pluto was conjunct Midheaven in the solar return chart for 2006/2007. Pluto must have caused a lot of stress and produced enemies. Pluto symbolizes politics and strategy and a conjunction with the Sun intensifies life and life style. It gives a certain drive to go on and on and to be strong and tough. Pluto on top of any chart reflects that power, money and influence are above all of importance. Maybe it is significant that Pluto is on the opposite side of the solar return for 2008/2009.

The trine with Pluto must be related to the conjunction of Uranus and Pluto. A swift intense change in life is taking place since she became a Minister. Pluto is ruler of the 7th house and that might indicate finding a partner. The coming trine with Uranus perhaps reflects the domestic situation, as Uranus is in the 5th equal house. Uranus rules the tenth equal house. Maybe she will find or already found a new challenge in life with Uranus and Pluto. And perhaps there are more challenges on the way in April...
But first there was the baby!

Notice that in her progressed chart Ceres (symbol of genes, motherhood and other basic female issues, but also of seed) is on top with Venus and Mars (passion: man + woman) close together! It was clearly time to have a baby! 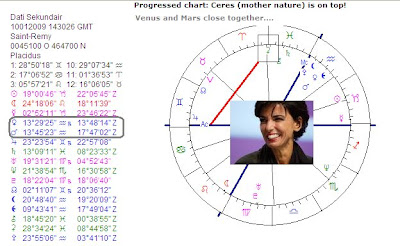