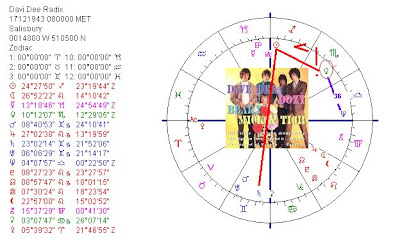 Davy Dee, one of the members of Dave Dee, Dozy, Beaky, Mick & Tich (Bend it, The Legend of Xanadu), died yesterday, age 65. There were plans to go on tour with the group again, but he was too ill to get on the plane to Antwerp.

David Harman (his real name) was born in Salisbury, December 17, 1943 with a 'calling'*) Venus and Neptune rising before the Sun. Venus is semi square the Sun, Neptune binovile Sun. Venus is semi quintile Neptune. Venus and Neptune are part of the artistic pattern that is found in so many charts of people with artistic talent, as you may see on my blog Art & Astrology. It is because we don't know the hour of birth of Dave Dee, that we don't know his Midheaven, the aspects with Midheaven or angular positions in the chart.

The Sun is opposition Saturn and that is the tightest aspect, unless the Moon is closer conjunct Jupiter. That would be so if he had been born between 7 and 10 a.m. Notice that the Sun is in aspect with both Saturn and Neptune and that these aspects are tighter than the trine with Jupiter is. The combination of Sun, Saturn and Neptune reflects illnesses (of the nativity or in the job) as an important issue in life. The combination of Sun, Jupiter and Neptune tells us about having fans (a devoted audience).
Dave Dee had prostate cancer for about 10 years. He died at Kingston Hospital, Surrey, where he was admitted on January 1.
See Oneinda

His progressed Sun is now in the first degree of Pisces. The changing sun sign often changes a life style or leads to 'another life', following changes in vitality and health.
Geplaatst door Astromarkt op 10:47 AM