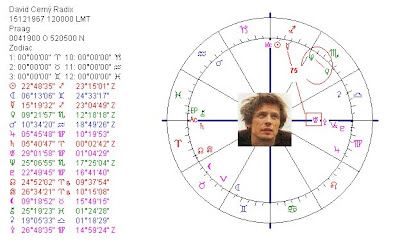 These are a few of the actual transits in the life of artist David Cerný, now that it has become clear that he lied about who made the controversial piece of art in the head office of the European Union. He had said that artists from all over Europe constructed it. The Dutch part was made by the unknown Dick Jansen, he claimed. But in fact, he is the only artist. Read Times Online. The piece of art costs 350.000 British pounds. It is a map of Europe representing The Netherlands as a see with minarets above the water, Italy as football players having sex with the ball, Germany as a Swastika of roads and Sweden as an Ikea-box. England was not represented because 'it does not really belong to Europe', etcetera.

David Cerný is known as a controversial rebel in the world of arts. On his birthday (December 15, 1967, Prague) Neptune and Venus (15 degrees apart) were rising before the Sun for the artistical orientation. The symbol of the rebel, Uranus, was prominently opposition Aries Point and 'calling'. Uranus doesn't make Ptolemaic aspect. Mercury neither. The combination Mercury-Uranus (in this chart 75 degrees apart) reflects controversial ideas or opinions. As both Mercury and Uranus are 'calling' this issue is prominent in his life and works.

Another aspect is Sun square Pluto, semi square Venus and Venus square Mars for intensified passion. Read about Venus-Pluto on my site Astromarkt and consider that Venus and Pluto together show the importance of earning money, too.

A chart is a piece of art, too:)... In this piece you see the picture of a controversial (Uranus) artistic person (Venus-Neptune) who could not resist the challenge (Pluto) to make money (Venus) and whose activities came to the light in the media (transit Uranus and Neptune. The fact that he lied and that that was a mistake: Saturn inconjunct Mercury.

Conclusion: his piece of art provoked controversy and that is what his art always does. So this upheavel is in line whit Venus-Neptune + Uranus.

And see Art & Astrology for more of the same pattern of talent...
Geplaatst door Astromarkt op 7:07 AM