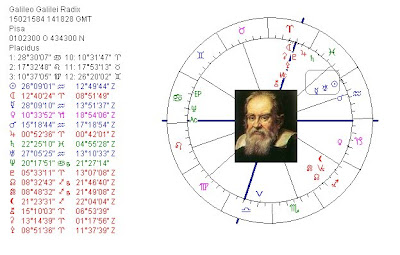 No statue in the garden of the Vatican for Galileo Galilei, the man who was condemned to death because he said that earth revolved around the sun. He was spared because he said he was wrong, but...he was right, of course. Only in 1992 the Roman Catholic Church officially acknowledged that. And now they decided not to honour him with a statue, after all...

The chart of Galilei is here above. Notice that Sun, Mercury and Uranus are close together for the man with the controversial ideas (and an open mind). And when he lied that he was wrong, he simply twisted the fact and changed (Uranus) his mind (Mercury). Of course there is more to tell about Galilei and his chart (maybe later...)