Ryan O'Neil and the judgement: therapy 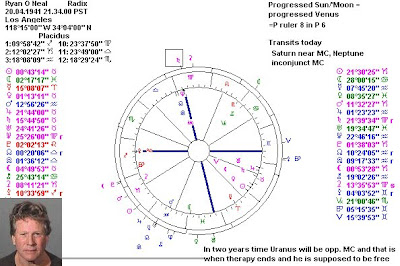 Ryan O'Neil is an artist and artist mostly have important placements and aspects with Neptune, the planet of the unreal or immaterial world of dreams, movies, beliefs, visions, art and ...drugs. The pattern of artistic talents in his chart is obvious: Venus relates Moon and Neptune. Moon is in Pisces and Venus in Taurus. Venus is final dispositor of the Midheaven. Watch the chart drawing with the pattern on Art & Astrology.

Today the judge judged that Ryan O'Neil must have therapy to control his drug addiction. In the natal chart above you see transit Saturn and Uranus on either side of the meridian. The combination of Saturn and Uranus often reflects limited freedom.
Geplaatst door Astromarkt op 3:39 PM