Void Moon: a study of the effect in the chart of the Inauguration

I use to consider a Void Moon a 'calling' Moon in natal charts. The meaning of the calling Moon is that there might be 'drifting' emotions, experiences, rememberances and habits or needs at any kind of level, depending on the rest of the chart, the sign etc.

MOON IN SCORPIO, RULING THE IC
The prominent Moon in Scorpio in the chart of the Inauguration of Obama is ruling the IC and I could not help noticing the strong need to keep memories, experiences of the past and history alive in the speech of Obama. I also noticed the emotions of the people, not only in Washington but all over the world. So in my opinion the void Moon simply indicates that it was an intense emotional experience for many and perhaps also the level of popularity of the present president. It might be a challenge to keep it that way as people's moods tend to change. Nevertheless, his presidential period started with deep and profound feelings because this was a HISTORIC MOMENT (one that will be remembered because it caused emotions, a Moon-moment).

VOID MOON = BAD MOON?
But, might it be true that a void Moon is a bad moon? Is it better to wait until the Moon enters the next sign, when it comes to an oath or a marriage or whatever event? I just had to check it. See the complete results and the links for the source that I used (please scroll down). Here is what I found:

Yet, (or ...also) it remains statisistics and only ONE position in the charts to be studied!

RESULTS AND RESOURCES
I added the results. X = for not completed (a for assassination, d for illnesses and s for being forced to step back) and V=for Void of course. I used these sources:
Wikipedia (presidents who died in office)
Memory.loc.gov, with a list of presidents and terms 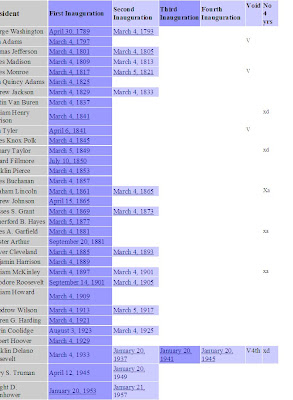 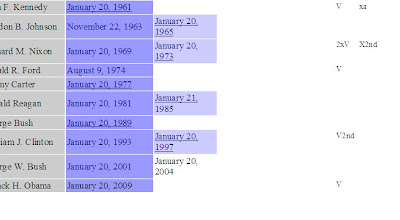 RELATED:
Presidents of the USA (article on my site Astromarkt)
Moon, diet and menu
and for all the post that you may want to find about Obama, click the label below...

PS about the Inauguration chart: did you notice that Mars is rising before the Sun and that he immediately started to do what he promissed to do?
Geplaatst door Astromarkt op 2:16 PM

thanks for your insight!

Hello,
Concerning President Obama's inauguration during a void of course Moon, I would like to invite you to read my article on it:
http://thenewtimesholler.com/ARCHIVE/inauguration.html
Thank you,
Amir Bey