3x Saturn in the chart of Ted Kennedy: collapse 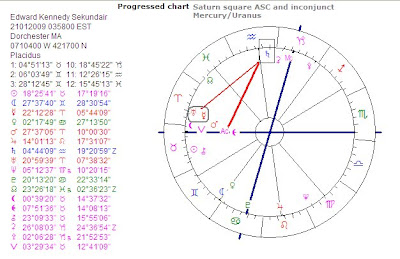 3 Times Saturn in the chart of Edward (Ted) Kennedy, reflecting the collapse of yesterday around 14:35 during lunch at Inauguration Day:

Transit Saturn rules the natal Ascendant (=situation) of Edward Kennedy. Transit Saturn ruled the 8th house of the moment of collapse (with Uranus elevated for the consternation). Saturn is 'calling' (prominent) in the natal chart. That means that Saturn does not make Ptolemaic aspects in orb 5 degrees or in sign.

There are more posts about the senator's condition:
About finding the malignant brain tumor
About the former collapse in May.

Ted Kennedy is expected to leave the hospital today. Above is the progressed chart of Ted Kennedy. Below is the chart of the moment of collapse with the natal positions of Kennedy on the outer side of the circle. 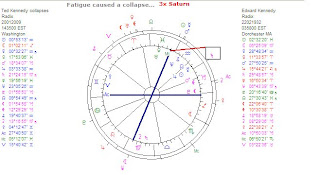