This is the progressed chart of Vladimir Putin. Neptune is conjunct the Libra Midheaven, trine the Moon and square Venus. And that is a pattern of (public) artistic talents like the other ones on my blog Art & Astrology. 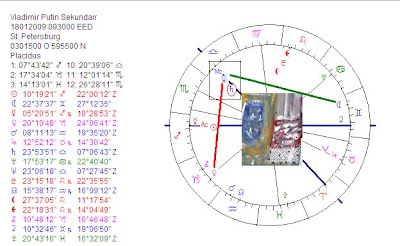 Vladimir Putin is a man with an oriental Pluto on Midheaven in the natal chart, a top politician. Now he sold his (first) painting, see this link. Pluto's prominent position in the natal chart tells us that he is above all and first of all a politician, someone with power and influence. This is his natal chart: 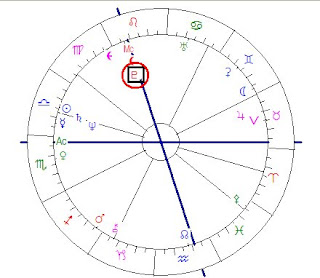 You see that in the aspects of Moon, Venus and Neptune and in their signs, related to the Midheaven. Remember that the positions in the progressed chart move on. The Moon moves fast. The progressed chart shows a period in time and a development, but the natal chart is the fundament of it. So I don't think that Putin will give up his power and start making paintings for a living:)
Geplaatst door Astromarkt op 4:36 PM