The second oath of Barack Obama 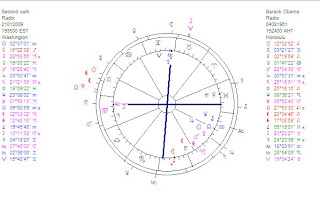 CNN reports that Obama has been sworn in again - this time without a bible - and this time the correct way. That was at 7:35 PM on Wednesday 21 of January 2009, for just in case people might question if Barack Obama was in fact the president of the USA because of a garbled oath at noon on the 20th. Per the Constitution, Obama became president at noon Tuesday without taking the oath.

MOON
Here you see the moment of the second oath (no Void Moon this time and no cheering crowds full of emotions, either). On the outside the positions of Obama's natal chart. His Moon is exactly conjunct the Midheaven of the moment of the oath (Transit MC conjunct Moon). Transit Black Moon is conjunct Obama's Midheaven. The Moon is of importance for the moment of the oath, as it seems and makes a difference between the moment that the administration started officially (Noon on January 20) and the moment of the oath (19h35 on the 21st). Maybe that 'tackles' the void moon that worries so many astrologers. At least, any doubt about Obama being the righteous president has now been a-voided:)

For the post about the Inauguration (with chart of the official moment at noon), click here...
Geplaatst door Astromarkt op 8:42 AM