Charles Dickens and the women 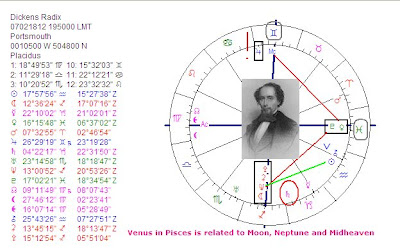 Upheavel after death, shown in the transits, is that possible? I believe it is so. Charles Dickens for example is in the news today*) because of the possibility of an affair with his sister in law and we see transit Uranus opposition Ascendant and Mars inconjunct Midheaven. Where in his natal chart is the amount of children that he had? And where are his affairs? He lived in one house with his sister in law when his wife left him and he had a mistress, too. An affair with a sister in law would have been considered incest in those days, so the rumours were rather dangerous.

It is not just coincidence that the aspects indicating artistic talents are also the aspects indicating romance and affairs, just as it is not coincidence that talented and gifted artistic persons seem to have more spectacular romantic events than the common people have. Charles Dickens has the pattern of artistic talents. Venus is on the Descendant, square Moon and Neptune on the IC. And Venus is in Pisces, sesquisquare ASC/MC. The Gemini Midheaven makes hard aspects with Moon, Neptune and Venus. This all shows us that there is possible artistic talent.

Charles Dickens wanted to be a decent man. He has Saturn oriental. He wanted to please his parents and to be correct in the first place, responsible and respected as a conservative father of 10. But...
He had the kind of aspects in his chart that indicate the possibility of having more than just 1 serious relationship. There are 4 aspects in the chart of males that go together with that: Mars afflicting Uranus, Moon afflicting Saturn or Neptune and Venus afflicting Neptune. Afflictions between (rulers) 1 and 7 are also reflecting possible divorce (or not marrying at all) and Jupiter in the 7th easily leads to more than 1 marriage.
Charles had Moon conjunct Neptune, Venus square Neptune and Mars sesquisquare Uranus. And the distance between the Moon in Capricorn with Saturn is a half semi square. Charles Dickens had all four of the indicating aspects. And as it happens (...) Mars and Uranus are making aspects in transit with the cornerstones of the natal chart.

So, it COULD be so, also because Venus is quintile Saturn. That expresses a creative way to continue a marriage or relationship. Moon square Venus is telling us that he had sense of art, but he also liked women, and if this aspect is correct, they like him, too:)