Jupiter, the Hudson miracle and the chart of Sully 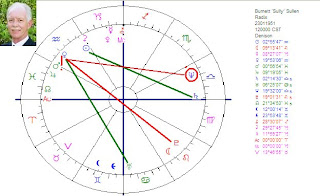 On Aquarian Solutions I found the date of birth of the heroic pilot of the Hudson miracle, Chesley Burnett 'Sully' Sullenberger III as 23 January 1951, Denison. He is a former military pilot with a prominent Mars and transit Jupiter is on his Sun right now. That makes him a good fighter and do-er with a lot of luck and success today.

THE NATAL CHART
When I see a chart with an unknown hour of birth, I start looking at:

as there are no angular placements to be regarded. There are a lot of observations:

- 70% of the placements were in air and water signs. Air + water = social behaviour (to communicate + to belong)
- Mars didn't make Ptolemaic aspects; the military, the activist, the entrepreneur or sportsman or...the workaholic
- Neptune was the first important (outer) oriental planet; he has an idealistic/ideological orientation or is an artistic person with vision, belief and fantasy. Empathy and compassion are 'ruled' by Neptune
- the Sun was tightly trine Saturn for being a responsible and correct person
- Venus was opposition Pluto and trine Neptune, sesquisquare Uranus, all very tightly. Again, I see possible talent and skills, sensitivity and a desire for alternation (and why not 'live that' as a pilot?).
- Mercury was tightly sextile Jupiter for a bright mind.

All in all this seems to be the profile of a bright, responsible, social and sensitive do-er, someone who will take action. Even without knowing the hour of birth we can see that.

NATAL CHART EXP LANES ACTION
This character is exactly the reason why 'Sully' went back a second time to see if there was any passenger left behind. It is a matter of compassion, responsibility and a strong focus on being courageous (Sun is quindecile Pluto). Accidents and rescues are always a cake baked of ingredients of circumstances, situations and human behaviour. The interaction of the astrological situation and the character of the pilot and HIS situation is being reflected in progressions and transits. 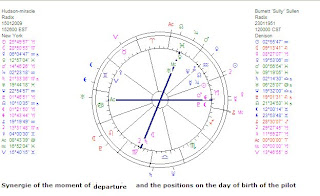 Later this year Sun will be opposition Saturn, so I wonder if there is a possibility that his career ends or that he will be (partly) blamed for the accident itself. Saturn is tricky and the transit of Jupiter is always fading away too soon...Somehow there will be farewells and goodbyes in his life coming up. As he is in a period of change and owns his own business already, perhaps he will start focusing on his own company.

DEPARTURE AND LANDING (WITH JUPITER 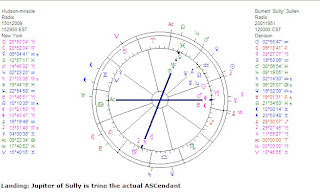 This is the chart for the moment of the landing, about 3 minutes later. The actual ascendant was exactly trine the Jupiter of Sully. I like Jupiter:) Soon after, transit Jupiter is semi square the actual Midheaven and salvation is near.

PS As 'usual' Uranus is elevated in the chart of the moment of the accident. Click on the label 'accident' to find more examples of Uranus position at the time of an accident.
PPS There were no placements in fire signs on the day of the accident and that is indicating that there was energy at any kind of level with strong ups and downs. In a natal chart this has the same strong effect as Mars 'calling'. To read more about missing elements and aspects, see Astromarkt 'Conspicuous in absence'...
Geplaatst door Astromarkt op 12:51 PM