Tiger Woods will be one of the speakers on Inauguration Day, in the morning. Interesting that his Mercury, symbol of communications and dispositor of his Midheaven and Ascendant, is conjunct the MC of the moment of Inauguration... 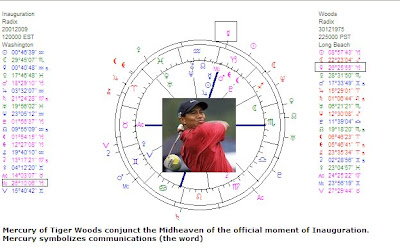 Tiger Woods is a very successful golf player. Sourav Ganguly is a famous cricket player. The tools are in both cases a stick and a ball (as you may notice, I am not an expert in sports:). In both cases there was a great influence of the father in the career. I wondered in what way their charts would be alike and I found a lot. There is a complete list when you scroll down. But first, the highlights!

You will find that both have an important Saturn, Pallas and Moon. And that they share a Gemini Midheaven. Saturn is the symbol of the parent (and ambition:) and the Moon reflects among other things, education and early years. Sourav an Tiger both have an important Pallas. Pallas is the symbol of patterns and often of importance in the charts of artists. I think Pallas is the symbol of associating (bringing together, linking, to unite ideas and experiences from the past).
Moon and Neptune are important in the pattern of artistic talents that you see on my blog Art & Astrology. They reflect imagination and vision. A golf player has to be able to 'have a vision' of the future routing of the ball. Both have Moon and Neptune close to the meridian. Here are the charts: 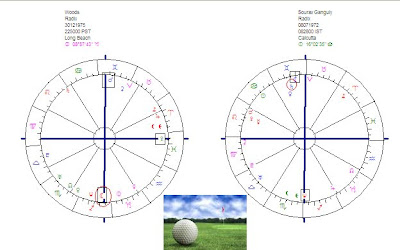 2. Prominent placement of the Moon (Sourav on top,Tiger on IC)

7. They share major aspects between:
- Sun and Uranus
- Moon and Mars
- Mercury and Saturn
- Venus and Saturn
- Jupiter and Pluto

8. Aries Point is involved in a midpoint combination that includes Jupiter and Pluto 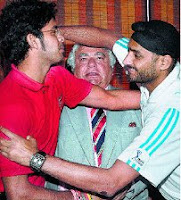 BTW, Jupiter is the symbol of support, joy and a positive attitude. Woods' Jupiter is square Ganguly's ASC/MC, Ganguly's Jupiter is conjunct Woods' Sun/Moon. And this is the picture of the two together.

*) 'Calling' = without Ptolemaic aspects in sign or orb 5 degrees. Oriental means: rising before the Sun as first important planet

RELATED:
Sharing aspects (from my site Astromarkt, about persons with the same combination of aspects in their charts and what it means for the relationship)