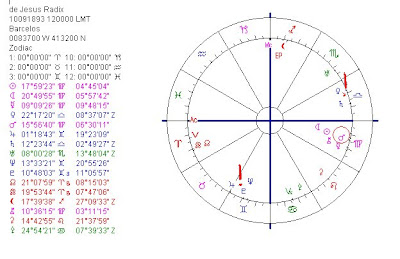 On September 1893 there were no planets or lights in fire signs and plenty in movable signs. María de Jesus, born in Corujo, Barcelas (Portugal) died today, at age 115. She had 4 placements in earth signs and 5 planets in air and that corresponds with the study I did about dying at young or old age. I found that placements in earth and air signs are more to be found in the charts of people who became very old and that in the charts of people who died at young age (due to accidents or illnesses) there were more placements in water and fire signs.
Apart from the combination of earth and air signs in her chart I see good luck in the 'calling' Venus and Jupiter. Venus and Jupiter are the planets of joy and fun.

In short: earth, air, Venus, Jupiter and movable signs attributed to the length of her life.

María de Jesus died with progressed Sun inconjunct Neptune. It is been told that she never had coffee or alcohol in het life and that she became a widdow at age 57. Transit Pluto is now inconjunct her prominent Jupiter. Two inconjunctions at the time tell us that she had to let go. And perhaps her natal chart (with a known ascendant, midheaven and position of the Moon) would show more.

GERTRUDE BAINES
Now Gertrude Baines is the oldest woman alive. She was born April 6, 1894 in Shellman and has no placements in earth signs, but ...50% in air and 50% in movable signs! She has a 'calling' Sun and Mercury with Sun semi square Venus and Jupiter. Venus and Jupiter are the planets that make life fun. And perhaps these planets reflects a pleasure in life that makes you stay on earth as long as you can.

RELATED
http://www.astromarkt.net/old.htm
About getting old

PS 'calling' means that the planet or light does not make a Ptolemaic (major) aspect in sign or orb 5 degrees
Geplaatst door Astromarkt op 11:34 PM