This blog Astropost is supposed to present an astrological take on today’s news. But there are controversies in history that continue still. One of those is the case of Calvin versus Servetus. 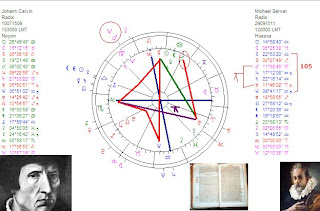 Johann Calvin (John Calvin) is the beloved founder of the Reformed Church, but he also was responsible for the death of an opponent, a Christian physician (and astrologer) named Michael Servetus. Actually, he was after the death of Servetus and delivered ‘evidence’ to the authorities and during the trial. Servetus died a horrible death as a heretic, in the name of religion on October 27, 1553 (with transit Neptune inconjunct Sun and Pluto square Venus). On that day, Calvin had the progressed Moon trine Midheaven (a good moment) and the progressed Sun square Jupiter (success). In other words: he had it his way. From that moment on he was the undeafeted leader of the Reformed Church. But ...he also had transit Saturn opposition and transit Mars square his progressed Sun. That is an indication for a deathly (Mars+Saturn) event, guilt and hurt.

Servetus’ hour of birth is unknown, but we know the hour of birth of Calvin. That makes it possible to offer an astrological take on the characters and the nature of the relationship.
Calvin is the leader in dispute over abstract ideas (1) and he is sometims a tyrant. The positions on the day of birth of Servetus reflect the risk taking stubborn scientist and outsider(2).
They were discussing the same sort of ideas and they were enemies. What they shared, also, is that they strongly promoted their own ideas and strongly wanted to make changes, taking risks doing so. It cost the life of one of them. In terms of astrology: they shared an oriental Mars afflicted by Uranus and a Mercury-Neptune-affliction (3).

There are links to related (explaining) articles on Astromarkt (to the article about Mars and Uranus, to the article about sharing aspects). Related posts can be found by clicking on the labels beneath this post (scroll down). There is also a small vocabulary on the left side of this blog for terms as 'calling', 'oriental' etc. Here is the reading of the charts of Johann Calvin and Miguel (Michael) Servetus.

JOHANN CALVIN
(1)For astrologers it is easy to see that Johann Calvin promoted a spiritual conviction (he had an oriental Mars = promotion opposition Jupiter/Neptune =religion and four planets in the house of convictions). He also was a leader (Leo Midheaven and 'calling' Sun). He was rather disproportional in his promoting activities, overly enthusiastic (Mars inconjunct Jupiter).
.
The tightest aspect combination is: Mercury trine Uranus and opposition Neptune. Mercury-Neptune is the combination of diffuse thinking, visionary ideas and hiding facts. The trine with Uranus reflects renewal, new ideas. The combination means that he has flashes of visionary ideas and that he is communicating these ideas, but not always very clearly.
He is talking about things that cannot be seen, touched or heard by others (faith, ideas about God). The ascendant is making hard aspects, reflecting the presentation of controversial ideas about religion. Uranus is inconjunct Ascendant. He is a controversial person (there are people fore and against him).

Ad the oriental Mars to these prominent placements and you see the Astro I.D. of a leader (Sun calling) in a dispute (Mercury on top and Mars oriental) over abstract ideas (Neptune square ASC). Unfortunately it is a leader who tends to force others to follow his rules.
The Moon is inconjunct Pluto for the issue of disproportional severe methods because of a need to be an authority, say: a tyrant sometimes. Strict rules and painful experiences are indicated by this combination. Calvin lost his only 3 children and he became a widower when he was in his early 40’s.
This Moon and Pluto, these fanatic emotions, are in aspect with the Sun (life!) of Servetus as if Servetus is the vivid emotional pain of Calvin who brings this difficult characteristic to the light (Sun).

MICHAEL SERVETUS
(2)Servetus was a physician who (until this was forbidden) also studied astrology (see the PS about that aspect of his life).
Servetus tightest aspect is Mercury conjunct Saturn (the theme of the scientist, the slow answers, see the earlier post). His Mars is inconjunct Uranus, reflecting disproportional actions on impulse (taking risks) in order to promote a novelty or make changes. Uranus is opposition Sun (he is an outsider in his world). Moon, Venus and Mars are 'calling'. The combination of Venus and Mars is the combination of passion.

He is known for his violent death. See how Aries Point is opposition his Sun/Mars and Mars/Saturn, sesquisquare his Sun/Pluto and semi square Uranus/Pluto, Mars is 67.5 Saturn/Pluto. The combination of Mars, Saturn and Pluto reflects the danger of unnatural death cause (to himself or related to him).

All in all the position on his day of birth present a passionate scientist, a successful outsider with a disproportional and risky drive to change the world (Mars inconjunct Uranus). As he disputed the strict ideas and rules of Calvin, the protestant leader, this man endangered the position of Calvin. It is strange that Servetus came to Calvin’s Geneva, but Sun-Uranus conflicts in the natal chart often makes a person do the opposite of what seems to be logical. Frederico García Lorca came back to Granada in spite of the danger in that conservative city in the Guerra Civil. He had Sun quindecile (165 degrees) Uranus and a ‘calling’ Mars inconjunct Uranus, the same aspect as Servetus had and the same combination of aspects with a prominent Mars. Both disregarded the warnings of their friends.

RELATIONSHIP CALVIN-SERVETUS
(3)Michael Servetus (or Servet) did not agree with Calvin’s idea of the Trinity. He actually planned his death*). The execution was a painful long process, too, sadly. Imagine that a person was killed in the most horrible way because of an idea that threatened the leading position of a powerful person.

Calvin has Moon inconjunct Pluto and both are related to the Sun (life!) of Servetus. That links his strict methods to the life of Servetus. There are many more indications. Saturn and Pluto of Servetus are in aspect with the prominent Mars of Calvin and this combination of Mars-Saturn-Pluto activates the existing combination in the natal chart of Servetus). The inconjunction of Mars and Uranus (risk taking) in the chart of Servetus is related to Calvin's Sun (who feels resistance coming from Servetus). Calvin's Midheaven opposition Servetus' Jupiter probably shows that Servetus had perhaps never imagined that Calvin wanted to have him burnt at stake. It was a matter of trust.
But as Calvin's Vulcanus was conjunct Servetus' Mars, there was violence on the way.

SHARED ASPECTS
What did he share with Calvin? They were involved with each other because they spoke of religion. Servetus had Mercury 105 degrees from Neptune and Calvin had the opposition. In my article about sharing aspects in relationships I explain it like this:
"Mercury and Neptune: movies and fantasies are the subject of your conservations. In business there might be a misty way of communicating or something hidden between you."

Servetus had an oriental Mars (=Mars rising before the Sun), just like Calvin. Both were activist, aggressive, promoting their ideas. This important Mars is afflicted by Uranus. Calvin has Mars square Uranus. Servetus has Mars inconjunct Uranus, so he lost.

*)("Si venerit, modo valeat mea autoritas, vivum exire nunquam patiar); if he comes, if my authority is worth anything, I will nog let him leave alive).

PS Always, with astrologers, Jupiter-Uranus is important and so it is in the chart of Servetus. He has Sun trine Jupiter in Aquarius (ruled by Uranus) and Sun opposition Uranus. Uranus is 112.5 degrees from Mercury/Jupiter and the Northern Node sesquisquare Jupiter/Uranus.