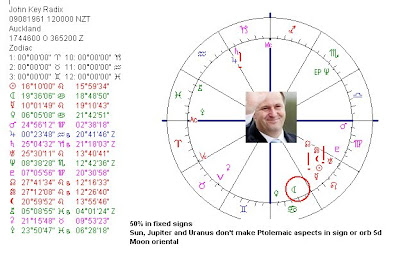 John Key, New Zealand's PM, was born in Auckland, 9 August 1961. He was in the news because he kept shaking dozens of hands after falling of the stairs and breaking his arm, last Saturday.

FIXED SIGNS
50% of the placements are in fixed signs, on his day of birth. Fixed signs are related to a strong will and perseverence. The tightest aspect is Mars trine Saturn and that aspect reflects that he is eager to do his duty as long as he can... That explains.

SATURN INCONJUNCT URANUS
The 'calling' Sun in his chart shows leadership or drawing attention at any possible level. And how about Saturn inconjunct Uranus (just like in the chart of Obama)? He said he was ashamed of falling down and that is why he went on. That is a bit overdoing, exagerating and too much; disregarding the change of his condition in order to stick to the planned obligations and protocol. Inconjunctions are certainly reflecting this missed balance between obligations/status/rules and interruptions that demand a change. Click 'inconjunction' or 'Saturn Uranus' on the label below to find more info and examples.

SO...
Even without hour of birth it is obvious that this natal chart belongs to a strong willed man who wants to go on doing his duty in spite of incidents, even if it costs him (pain, for example), because he holds on to his status, duties and obligations (as scheduled).

With transit Pluto sesquisquare his Sun he already was to meet challenges and perhaps this was one of them. He also has transit Jupiter trine progressed Sun. The combination of Jupiter and Pluto transits often leads to successes. He managed to make a success of a fall. No matter what aspect made him fall (we don't know the ASC), it was on a day that transit Sun was conjunct Jupiter. That explains, again. Because this is what I wrote a few years ago about the solar transit with Jupiter:

"Sun with Jupiter
Progress, happiness (even in case of accidents), trust, joy, success"

And the labels below.
Geplaatst door Astromarkt op 7:32 AM