With the Hofmans' affair people mean the crisis in the Dutch royal family supposedly caused by a faith healer and related to the bad state of marriage of Queen Juliana and Prince Bernhard in 1956. This post presents an astrological take on that affair and shows you the important role of Pluto in this.

Pluto had the starring role in the Greet Hofmans' affair. Pluto symbolizes power, influence, policy, money and sexuality. Pluto's effect is always intensifying life. Pluto is important in the chart when there is a come back, a crisis, a discovery, and when you deal with the consequences of change.

Pluto is very prominent in the charts of Juliana, Bernhard and Beatrix and became even more important in 1955/1956.
In the natal chart of Queen Juliana, Pluto was ‘calling’ (without Ptolemaic aspects) and angular (on the Ascendant). Pluto is also 'calling' in the chart of the present Queen of the Netherlands, Beatrix, daughter of Juliana. Pluto rises before the Sun in the radix of Prince Bernhard, husband of Queen Juliana and father of Queen Beatrix. Pluto was thus the planet of his orientation.

In 1955/1956 the prominent Pluto's of Juliana and Beatrix were being activated by an aspect with the progressive Sun. Juliana already had Sun semi square Pluto in her natal chart (so the effect was stronger in progression, when she had Sun conjunct Pluto). Beatrix had progressed Sun inconjunct Pluto, an indication for a dramatic period in her life. 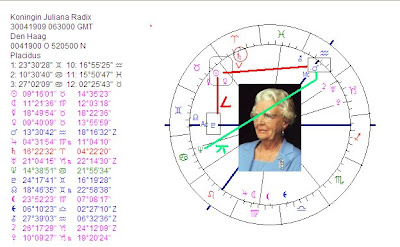 Pluto has a key role in the chart of Juliana. So has Mars. Her chart marks a power struggle.She also has Saturn rising before the Sun for responsibilities and duty first. 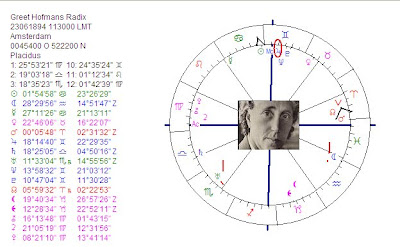 Greet Hofmans was a person who was considered to be a special one, an early outsider with a positive view. When she met the members of the royal family she had a fortunate progressed aspect: progressed Moon trine Jupiter. She also had transit Pluto conjunct progressed Midheaven for a break through. But...Pluto of Juliana was conjunct the Midheaven of Hofmans.

Interesting besides: in the year that Greet Hofmans became a controversial person, Mercury and Uranus were on the angles of her progressed chart. When she was born she had Uranus 'calling' and Moon, too. The Moon-Uranus prominence reflects the possibility of being considered 'seer' (having insight in upcoming events).
With Sun and Jupiter on either side of the Midheaven she was likely to make her position better than it was at birth.

She shared Sun square Mars with Juliana (both women have Sun square Mars) and was not married. Having a mutual enemy is one of the ways sharing*) Sun-Mars 'works'. The mutual enemy was of course: Bernhard. Also watch Moon inconjunct Mercury for 'simple daily lies' to try to say what is been expected. 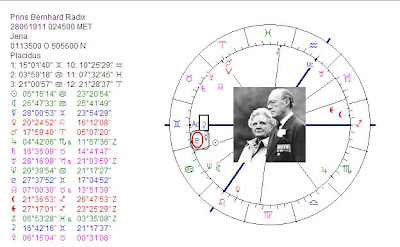 Prince Bernhard was a man who could tell 'strong stories' and he was first of all a strategic 'check player'. Money, influence and power were of importance to him. Pluto was the planet of his orientation. In 1956 with transit Saturn inconjunct this Mercury-Pluto he told the strong story of a second ‘Rasputin’, a woman that he himself had introduced to Juliana and whom he even consulted for his horses. But her silly advice to give his horse cream and meat and the way she was invited to pray for the health of his eldest daughter while she needed surgery for appendicitis made him change his mind. When Juliana threatened to divorce him, the Greet Hofmans' affair started. He told a Dutch newspaper that the affair came at the right moment to distract the attention from his relationships with other women. 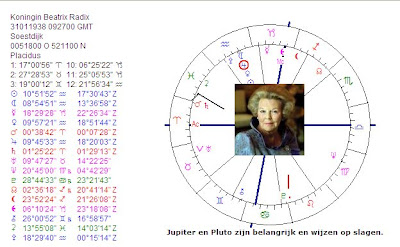 Queen Beatrix is a powerful and dominating woman (yes, a queen:). Pluto is prominent in her chart. Pluto also means 'danger' sometimes (to life style or life itself). At age 17, with progressed Sun inconjunct Pluto, she participated in the drama between her parents (that could have forced her to become queen at 18) and suffered from the influence of the idea that praying helps to cure appendicitis. She was sent to the doctor in time, thanks to interference of her father.
The synergy between Hofmans' chart and the chart of Queen Beatrix is intense. Mars, Saturn and Pluto are linking their charts. This combination is a combination of danger.

PLUTO: TOO INTENSE
When Pluto is important in a relationship, often and soon the relationship is too intens and full of problems. Pluto's effect is transformational and strong. When the progressed Sun of Juliana shed light over the Pluto-MC combination with Hofmans, it was time for a vital change and a (forced upon) ending... A commission of wise men (...) advised the Queen to stop seeing her friend. 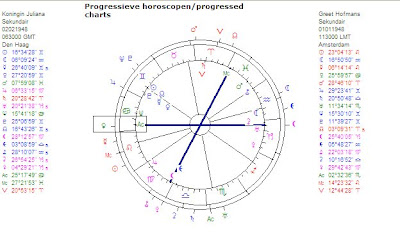 PS about Moon and UranusWith aspects between Moon and Uranus you long for sensation and excitement, like Schumacher does and like Peter R. de Vries or Theo van Gogh. With this aspect you have a sort of a 'foresight' and intuition. Sometimes people consider you to be a seer. At least you are special among the ones that surround you.

See the labels for related subjects and explanations...