Chart of Darwin and transit Neptune 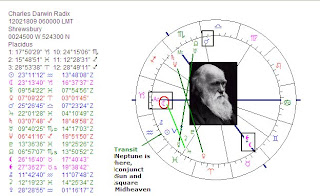 Exactly this year, now that the world is celebrating that it was 200 years ago that he was born, Neptune is making hard aspects with the natal Sun and Midheaven of Charles Darwin. The negative light has already been shining in the publicatons about a poll in my country. The results, according to the press, was that 19% of the Dutch don't believe in the theory of evolution and 22% believes in design by a God. Interesting, so, that still 72% of all interviewed persons says to believe in the theory of evolution. That is a large majority. The reports in the papers however mention the non-believers only. That is reflected by Neptune.
Mercury trine Uranus is the tightest aspect in the chart of Darwin. It means that he is a 'free thinker' or a person with an independent mind, someone to invent (Uranus) a theory (Mercury).