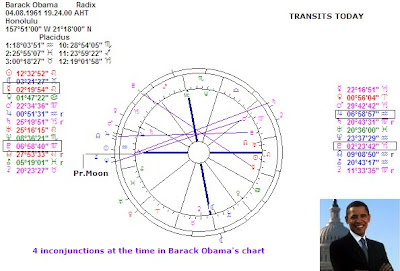 There are a lot of transits inconjunct the natal and progressed chart of Barack Obama these days. Difficult progressions (and solar arcs) are ahead. It will be hard months to deal with. The times of progressed Sun trine progressed Jupiter are over now. Transit Jupiter is no longer trine his progressed Sun. The party is over. How about the next months? It won't be easy...Transits and progressions of Saturn, Mars and Pluto are coming up.
(In this post I also explain the combination of Mars-Saturn-Pluto).

Fact: yesterday Barack Obama admitted that he blew it when he supported mr. Dasch, who withdrew his nomination for 'health secretary following reports about not having paid $140,000 in taxes. A few hours before that Nancy Killefer (supposed to be first chief performance officer) had to step down because she failed to pay payroll taxes on a member of her household staff.

A lot of inconjunctions in transit refer to losts and disproportional events or results. Remember the 4 inconjunctions with the chart of Tilmant (ING) who had to step back?
The combination shows a successul communication policy following a mistake but... there is also a lot of concern. Inconjunctions refer to the 'but's' in life.

TOMORROW: MORE DIFFICULTIES
Before 3 March there will be a perfect square of Mars and Saturn in his progressed chart and by the end of March his progressed Midheaven will be inconjunct his natal Sun(see disclaimer). I hope that these astrological conditions don't refer to his physical status. Mars and Saturn reflect hard measures to be taken and Mars-Saturn often reduces life's energy.

Also:
- transit Saturn is inconjunct his progressed ASCendant with
- transit Mars square MC and
- transit Pluto inconjunct Moon
and these transits will be perfect mid March.
There again is the combination of Mars-Saturn-Pluto, also related to the progressed Sun/Moon midpoint (scroll down).

Another thing is the growing contact of Mars, Saturn and Pluto in his progessed chart (midpoint combinations getting stronger). And the progressed Sun is changing sign and so his life or lifestyle is transforming; Barack Obama is in a period of change. He has not get used to being the worlds number one,yet.

Difficult prospects... But who said it would be nice and easy? This is from my post of December 2008:

"Less fortunate is the development that the combination of Mars-Saturn-Pluto is getting tighter in progression. Mars square Saturn (ruler 10) and semi square Pluto is indicating (and Saturn sesquisquare Pluto) at least: increasing political battles or difficulties, and possibly a growing danger related to his position. At the moment Mars is exactly square Saturn ruler 10 in his progressed chart. He made it (ruler 1 square ruler 10) by hard work (Mars-Saturn) and right now Pluto (money issues!) are frustrating his goals. Saturn in conflict with Pluto requires political 'die hards', because this aspect will confront a person with the disadvantages of politics. So I don't think that Obama will have an easy period ahead, though fortunately the amount of support and goodwill that he created will help him to succeed. This help is astrologically coming from Jupiter (transit Jupiter trine progressed Sun#). He might need it.

#)PS: that helpfull transit has past and gone now that it is February 2009).

MARS-SATURN-PLUTO
There is no Mars-Saturn-Pluto midpoint combination in the natal chart of Obama. But the repeating Mars-Saturn-Pluto combination in transits and progressions of Obama asks for explanation.
Mars is the symbol of actionk, work, drive and energy; sometimes 'hit','strike' or 'hurt'. Saturn is the symbol of ambition and restriction, duty and responsibility; sometimes fear and failure. Pluto symbolizes force, power, intensity and challenge; sometimes defence and prosecution. When those 3 come together you get 'die hard power', intense limitations of energy, the drive to defeat enemies and the combination of death (Mars-Saturn: end of energy) and the use or abuse of force (Mars-Pluto). In the chart of a politician (Pluto) the combination might refer to hard and sometimes lost political battles, until you become a professional and official (Saturn) user/abuser (Mars) of power, strategy and money (Pluto).

In my book Astro Trio I say it like this (translated):
'Exhaustion, working too hard, could have to deal with a violent situation or use violence . Wants to win in spite of resistance.
Unfortunately this combinations is often seen in cases of unnatural cause of death (active, as a victime or a witness) like for example in the charts of mrs. Mahaty (victim of Homolka), John F. Kennedy, Yoko Ono and murderers Idi Amin, David Berkowitz, Volkert van der Graaf and Paul Bernardo'.

It is not surprising that a new president of the United States faces challenges and is forced to take hard measures and to work hard, especially in the first 100 days when he has to show his voters that they made the right decission. And clearly, being a president is a dangerous job. That is why there is so much protection. To have to be defended (Mars-Pluto) because of your status (Saturn) is maybe one of the other possible ways to reflect Mars with Saturn and Pluto.